Forbidden Desert puts you and your crew crash-landed on a vast desert landscape. It's up to your team to piece together your escape vehicle and get away from the steampunk-inspired lost city that you've discovered alive. Forbidden Desert is designed by Matt Leacock, the same designer of the much-heralded game Pandemic. 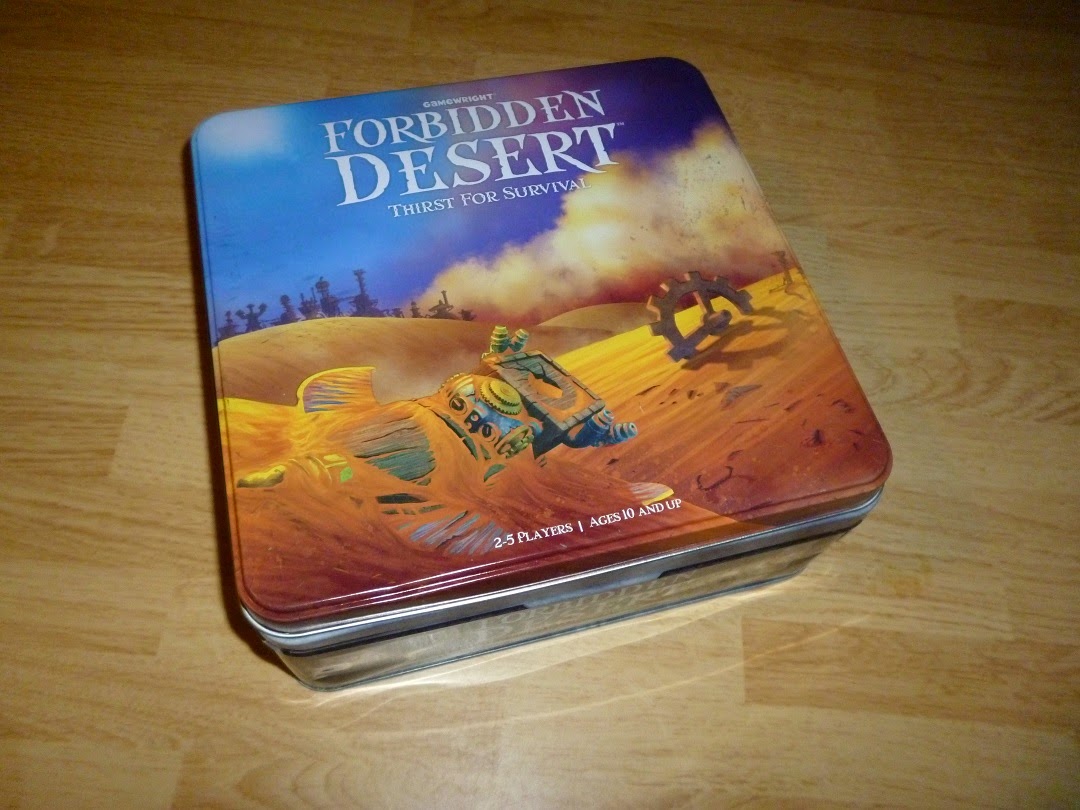 Like Pandemic, this is a cooperative game. Each player takes on the role of some sort of specialist, like a Navigator or a Meteorologist. Players are looking for four parts of their vehicle which are a propeller, an engine, a sundial-type thing, and a...spiky orange thing? 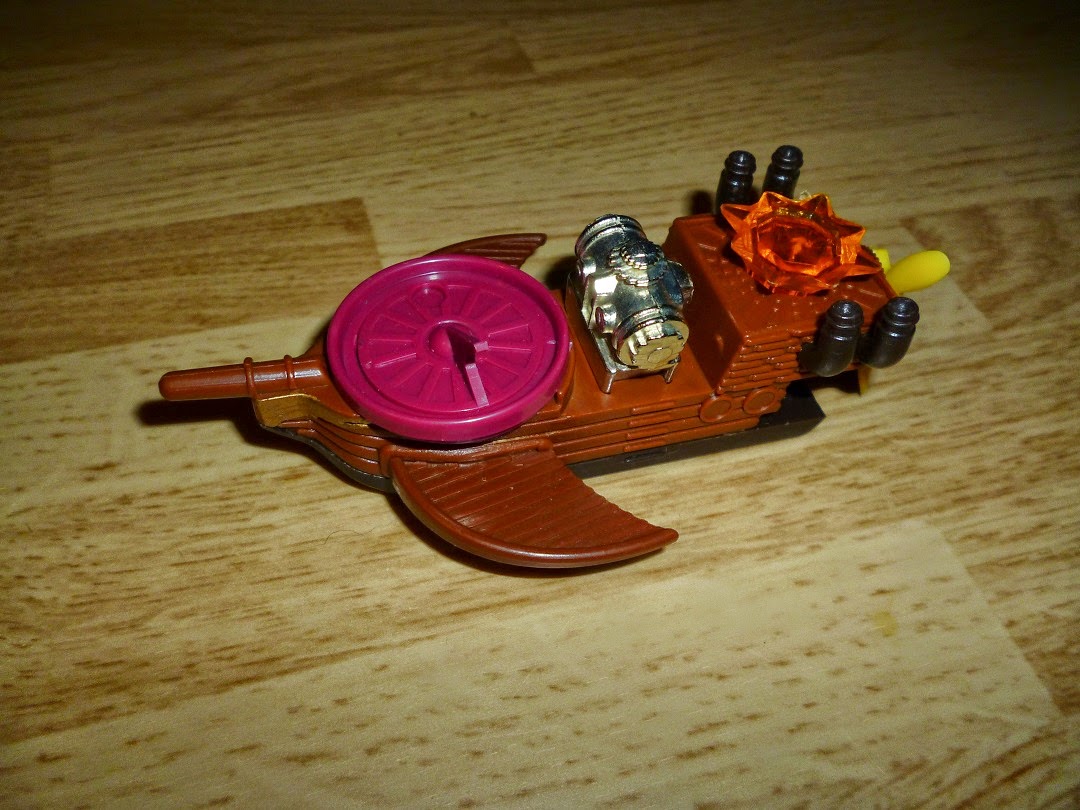 Whatever that orange thing is on back, I want no part of it once it gets me home.

The game starts off with a bunch of desert tiles placed randomly in a 5 by 5 grid, with the center tile missing. There are also piles of sand all over the place. Most tiles look like nothing but dunes, although some have a small icon noting the possible presence of water as well as the starting point. Players travel around these tiles, excavating them and taking any bonuses they get. There's also a sand storm marker to note how bad the sandstorm is. 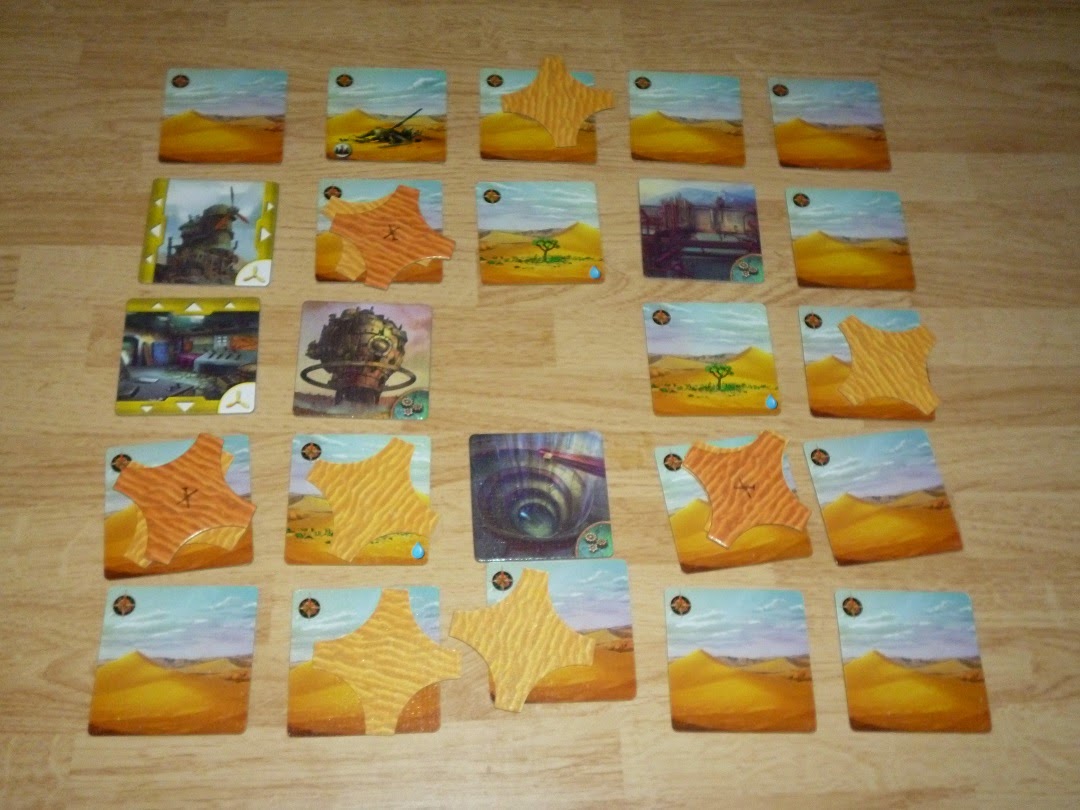 A desert landscape with a few of the tiles turned over. Note the piles of sand (the plus-shaped tokens) and the "eye of the storm" in the middle.

Each player, on their turn, can take four actions. This can be a combination of moving, digging out piles of sand, excavating a tile, and picking up a part. After they take their actions, the sandstorm moves. 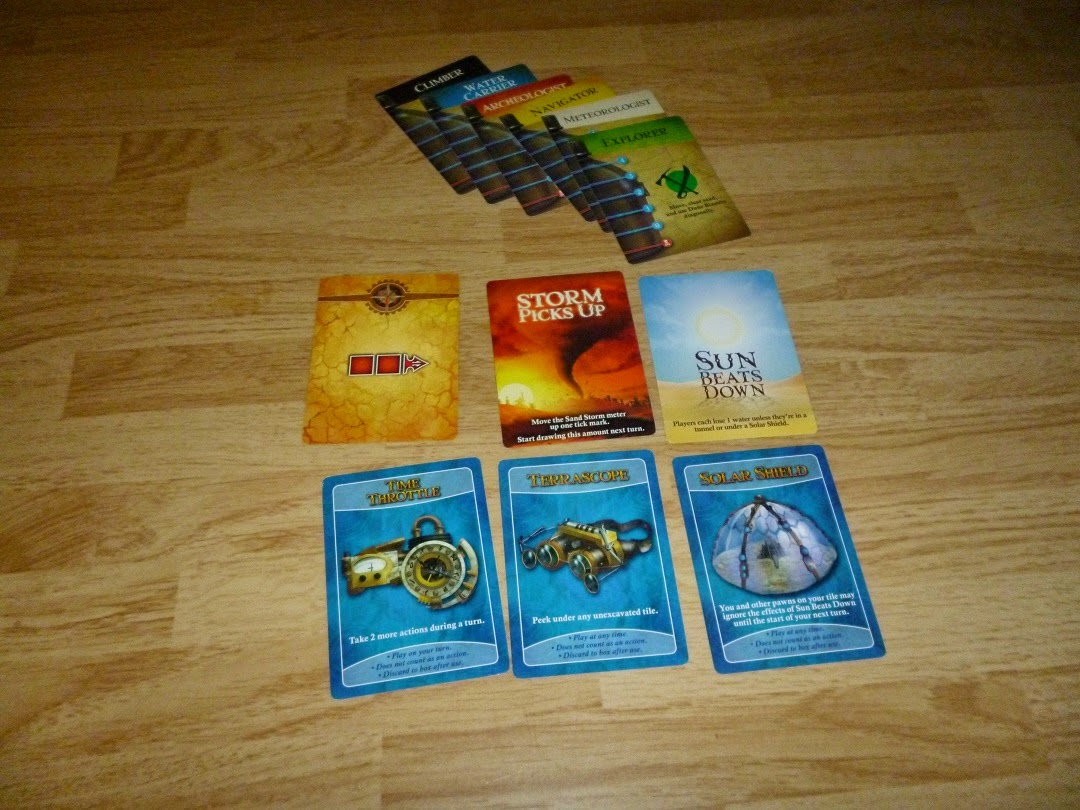 The sandstorm moves in such a way that it will shift the tiles. In the image above, the yellow card with the red arrow is a "shifting sand" card; it means that the eye of the storm (the space without a tile) is going to move two spaces to the right. To do so, it simply shifts the two tiles to make room for it. Every tile that gets shifted also gets a pile of sand on it. Since multiple cards are drawn as the storm gets worse, the eye of the storm will probably shift multiple spaces in multiple directions each turn.

Players are trying to excavate as much as they can, because the goal is to find the missing parts. These are found by excavating two different tiles: one notes the column while the other notes the row, and where the two intersect is where the part is. Of course, since the sands are constantly shifting, where the part was last turn may not be where it is this turn, so it can be a bit of a chore. In addition, all that shifting sand is producing a lot of piles of sand--all of which require valuable actions to dig out. In addition, players simply can't enter tiles with a lot of sand piled up on it, and many players may find themselves buried in the sand with no recourse but to dig themselves out!

Occasionally, a "Storm Picks Up" card is revealed; this will increase the intensity of the storm. There's also a "Sun Beats Down" card that will cause the players to get thirsty--each player has a certain amount of water, and when they need to take a drink and find their canteen empty, they're dead (and the game is over). Thankfully, there are several wells in the desert, although coordinating everybody to be in the same spot can waste valuable time, and one of the water spot is actually a mirage.

There's also a few other items. Tunnels connect two parts of the map, and can protect you from the sun. There are also cards can be drawn to aid you in your quest. There are quite a few ways to end the game in failure--if there's too much sand, not enough water, or if the storm just gets too out of control. Winning simply means collecting all the parts and getting everyone back to the launching pad.

What I Don't Like About The Game:
There's not a lot of downsides to this game. Not everyone loves cooperative games, of course, and if you aren't a fan this game won't convert you. And the theme and lightness of it can sometimes feel a little unsatisfactory. But the fun-to-time ratio is just about perfect, and it's hard to find too much fault with it. I'd give this a solid B+ grade. I can't say I'd want to play it all the time, but I doubt I'd ever turn down a game.
Posted by Crank Crank Revolution at 9:00 AM