Board Game Review: Ticket To Ride

Ticket To Ride is rightfully considered a classic board game. Released just ten years ago, it's sold over two million copies (and, more importantly, shows up regularly on shelves at big box retailers) and is destined to stay around for the long term. From publisher Days of Wonder, let's take a look at it. 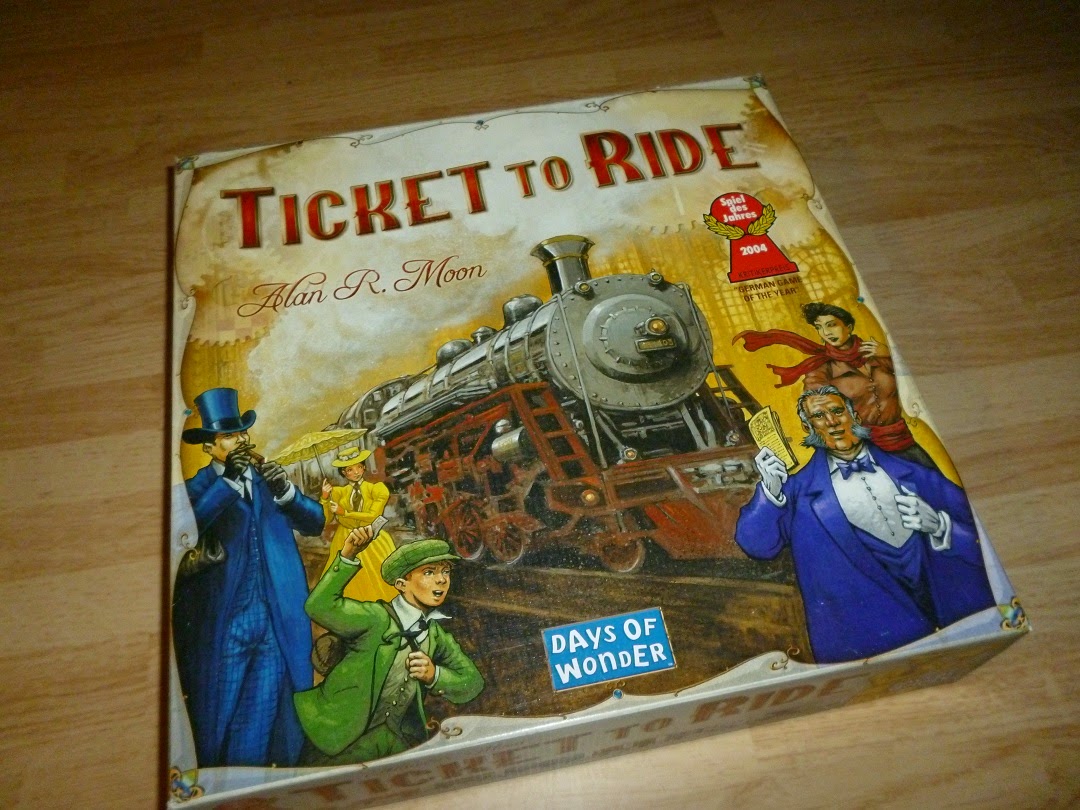 In Ticket to Ride, players are trying to earn the most points. They do so in two ways: by laying down train track between different cities, and fulfilling "routes" depicted on cards. The route cards are by far the more lucrative way of winning points but can be very difficult to pull off.

The basic game is a map of the United States and Canada. 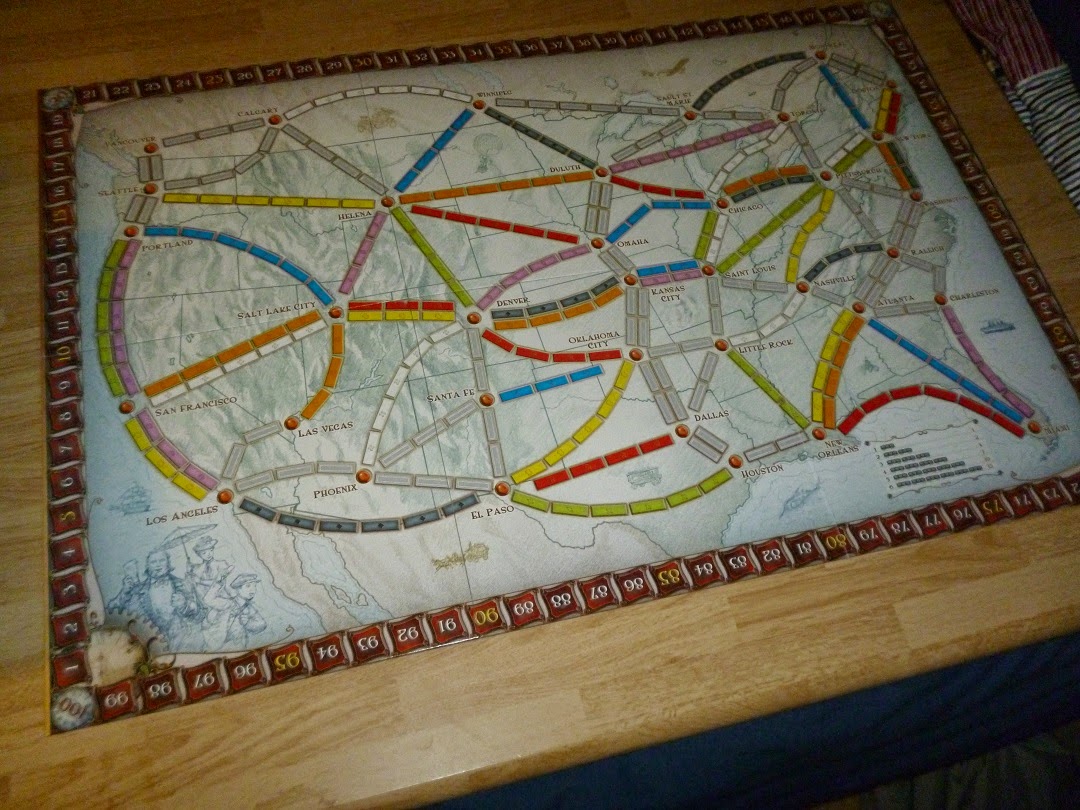 Each turn, a player may do one of three things: draw train cards, draw ticket cards, or build track.

When drawing cards, a player may choose face-up cards or cards from the top of the deck (or a combination). You don't know what card you're getting when you draw from the deck, but then again neither do your rivals. (You may also not want any of the available cards.) There are also "wild" cards; if one of these is selected face-up, it's the only card you can draw that turn. (If you happen to get a wild card when drawing from the deck, great; you can still draw two.)

If you choose to draw a ticket card, you draw three of them, and may choose one, two or all of them to take. (You have to choose at least one.) There's no limit to how many train or ticket cards you can have in your hand. 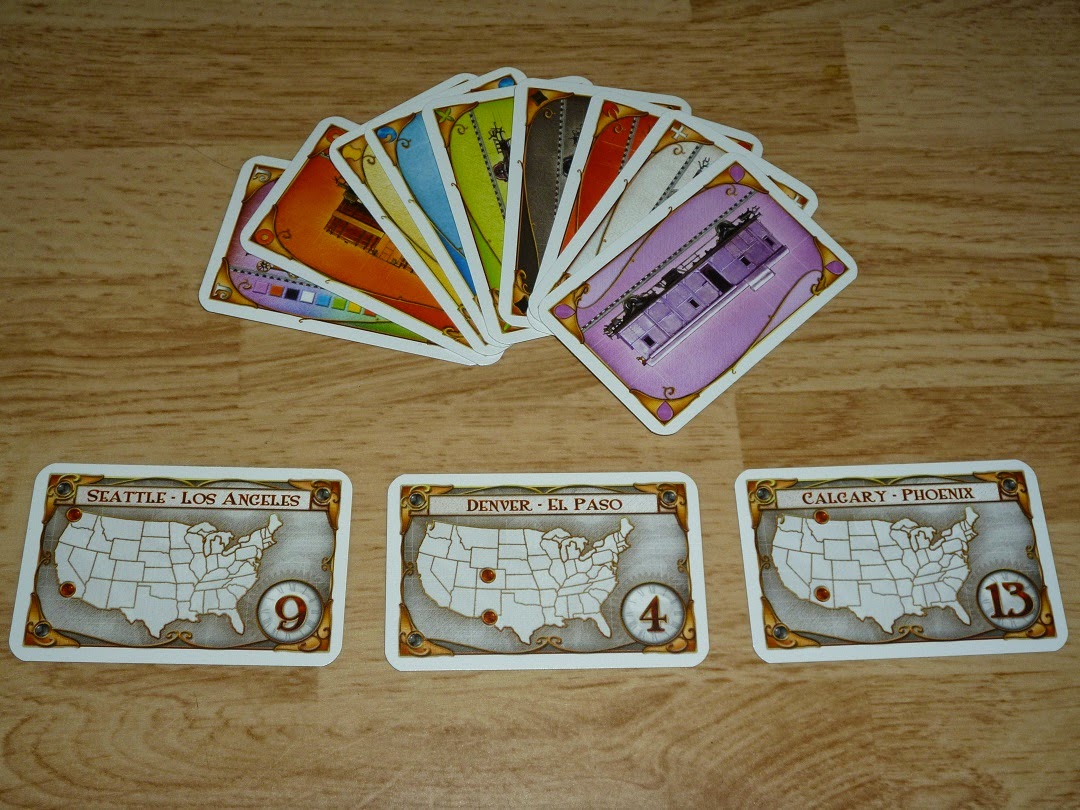 Train cards above (the wild card is on the left); ticket cards below.

Finally, you can build track. In order to build track, you must have the appropriate color of trains in your hand. For example, looking at the map above, if you wanted to build a track between New Orleans and Miami, you would have to discard six red train cards. Gray routes on the board can be fulfilled with any color of trains, although they have to all be the same color. (For example, if you wanted to build between Phoenix and El Paso, you could play three green cards or three red cards or whatever--three cards of any similar color.) Wild cards, of course, can stand in for any color. 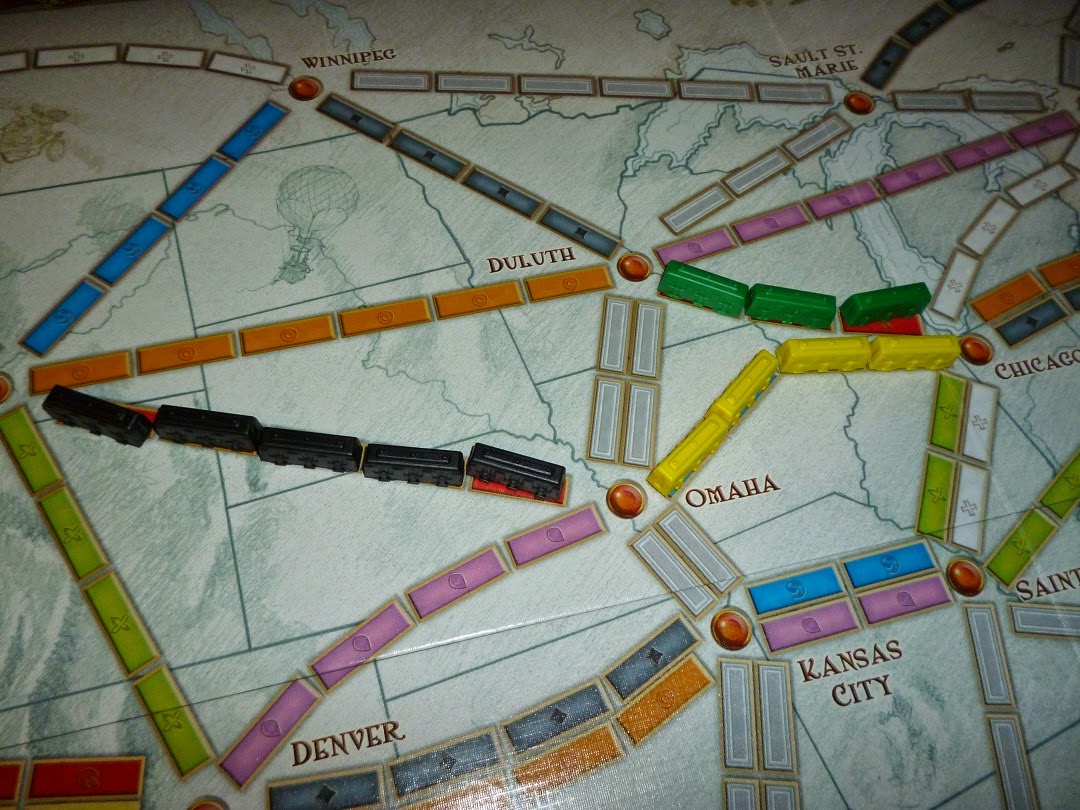 Each time you build any track you score a small number of points. At the end of the game, any ticket cards you have fulfilled gain you the number listed on the card; you fulfill it by having uninterrupted track from one city to the other. If you fail to do this, you lose the number of points on the card! There's also a bonus for the longest track on the board. Highest scoring player wins!

In the end, Ticket To Ride has sold all those copies for a reason. It's a simple game--especially if you are familiar with rummy, since this game is simply rummy with extra rules. It's a common and exciting theme that a lot of people are familiar with. It's one of the most common gateway games used to introduce new players into the hobby and it's hard to argue with it's longevity. I grade it an A.
Posted by Crank Crank Revolution at 9:00 AM