M&Ms have had a relatively decent track record when it comes to new flavors. (See here, here, and here.) So when the Mars company produced a fall-themes holiday line, I figured it was worth it (in the interests of science, of course) to try and review each one. This year, they released Candy Apple, Candy Corn, and Pumpkin Spice. 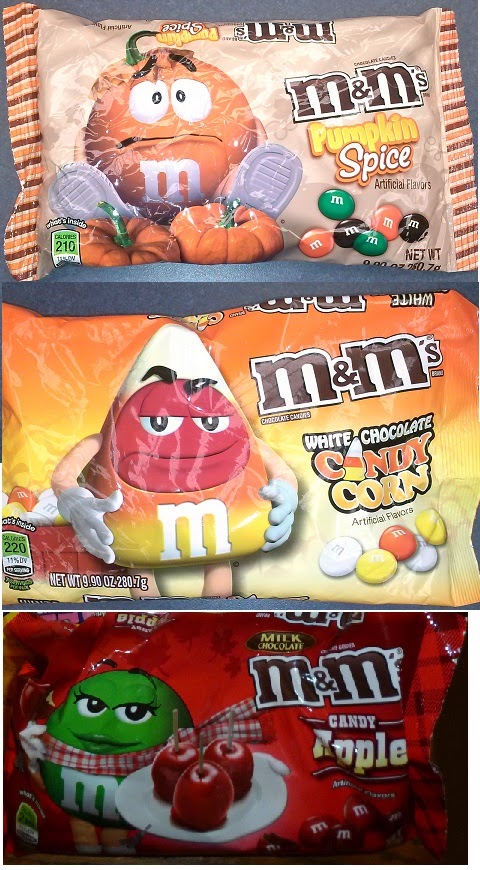 I apologize for the above photograph; I didn't have them all in one place at the same time, so I had to knock up the world's lament collage.

Pumpkin Spice: Since everything, by law, has to have a pumpkin spice version, this is no different. It's actually quite mild; I didn't hate trying this one because it was combined with chocolate. This at least made it different than most other pumpkin-flavored varieties. Still, it got old after only a handful, so this is one of the ideas where a little bit of it goes a long way.

Candy Corn: As I've mentioned in the past, I don't care much for candy corn. And, like the Carrot Cake M&Ms I linked above, the first few you try are good but then you're done. This one is white chocolate, which I am also not a fan of, and so this was a definite pass for me. I will say that it tastes exactly like you think Candy Corn M&Ms are going to taste like; the only question is really "Is it worth eating this over regular candy corn?" My guess is no, but it's at least worth a try.

Candy Apple: This variety ended up being my favorite, but it's also by far the mildest. They're solid chocolate with a slight apple-ish aftertaste. It's not bad--the chocolate is nice and strong, and I suspect the apple flavoring brings it out a little bit. I'm not really sure if it's worth buying this over regular M&Ms, but apple is a pretty universal flavor and I can't imagine really going wrong with it. It's certainly worth trying out.

All in all, I was disappointed with this group. I know I'm not the target customer for some of this (Candy Corn never had a chance) but I'm always hoping to be pleasantly surprised.
Posted by Crank Crank Revolution at 9:00 AM