It's a bonus review! This wasn't going to be part of the regularly scheduled candy review program, but when I saw them at the store I couldn't resist. Russell Stover has released in the past a line of what they call Big Bite candies, which are essentially candies larger than what you'd find in a box of candy, but smaller than an actual candy bar. 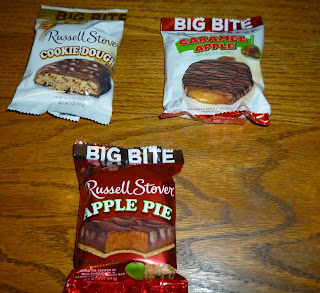 Unbeknownst to me, there's actually an entire line of these things, including Pumpkin Pie, S'Mores, and Red Velvet. It's probably best I just saw these first.

The Cookie Dough candy is pretty good; it tastes like actual cookie dough, not some weird cookie-dough-style-flavoring. The Apple Pie is really, really good, except for some reason that slice of graham cracker at the bottom isn't attached; it's just kind of there. (My package basically had graham cracker dust.) Still, the candy itself was excellent and I can honestly saw that if you feel like having apple pie but don't want to actually get an apple pie, this is a reasonable substitute. Finally, Caramel Apple is good, although my least preferred, mostly because the apple flavoring isn't particularly strong. To me, it just tasted like a thick, caramel candy, which certainly isn't bad.

I haven't tried the other candies in this line; I'm hesitant on some (I don't care for pecans, and some of the other flavors seem pecan-heavy) but more than willing to try others. But these candies are really, really good. They don't suffer from the artificial flavor that most specialty candies do (they are artificial; they just don't taste like it). The biggest negative is the price; I couldn't find these for any less than $1.50, and for a candy that's less than half the size of a standard candy bar that's a little too steep for a casual dessert. (Basically, they're half the size and twice the cost.) But they are high quality, and I'd say they are worth it for an occasional snack. If they could be consistently found around a dollar or so, they'd certainly be worth picking up more often.
Posted by Crank Crank Revolution at 1:43 PM