I was involved over this weekend in a dinner theater/murder mystery. A Murderous Affair, it was called, written and directed by Rhiannon Bowser. I was, of course, the victim. 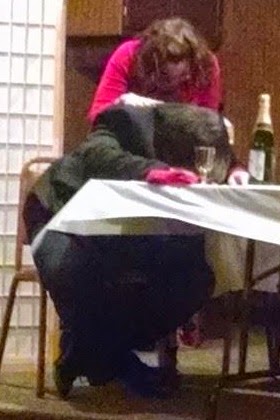 My acting skills in action.

The story involves a rich head of a family, Victor Elm, whose interests include running a dog shelter; his wife, Samara Elm; their live-in French tutor, Armand; whiny sister Vivian; and the daughter, Storm. Add into the mix a crazy cat lady and an animal rights activist, and you have a very...tense fundraiser. Victor uses the opportunity to talk to the family about the will, which he plans on changing due (in part) to the screwed-up nature of the family.

When the lights go out, Victor is found dead, beat over the head with a candlestick, and it's up to the inspector (along with two trusting cops) to solve the murder. A lot of people seemed to have wanted Victor dead; the animal rights activist thinks Victor uses his dogs for fighting; the cat lady would rather the money go to her own cat shelter; the sister is upset she's no longer going to be in the will; the wife and the tutor seem smitten with one another and would seemingly love to have Victor out of the way; and everyone's upset that the will is going to Armand, who isn't even in the family.

As in true dinner murder mysteries like this, the audience got involved as well. Random members were given cards with information on them (such as Victor's sketchy lawyer, or ever sketchier tight-lipped mobster friend) and they improvised an interrogation. After the second act, audience members could vote on who they thought did the deed. And cast members spent the intermissions working the room in character, trying to drum up suspicion and deflect blame. (Except me, of course. I had to hide in the corner. I had planned on spending the rest of the play behind the scenes, but the only place was a scary, cold storeroom. So I just hid in the corner and played games on my phone. It's so much fun being murdered.)

Murder mysteries can be tricky. The plot needs to be complicated enough so that enough evidence can be presented so that there are several reasonably likely suspects, but not so complicated that the audience can't follow it. The audience needs to be engaged; if they aren't, the parts of the play that can be the most fun--the interaction--can fall flat. Thankfully, both the script and the audience worked masterfully together. When the audience voted, the votes were fairly evenly distributed, so no one character came across as obvious. 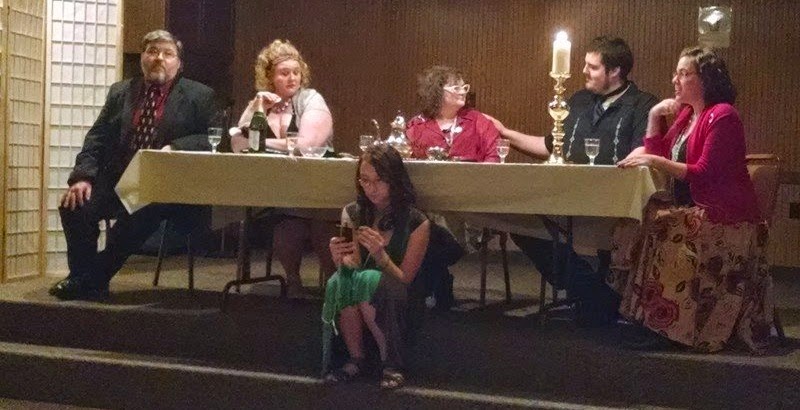 One of these people killed me. OR DID THEY?

The entire experience was fun. I'm not an actor by any means, but everything ran smoothly and the audience enjoyed it. Our performance is over, but I strongly recommend you attend one of these whenever you have the opportunity.
Posted by Crank Crank Revolution at 9:19 PM