Do you know what I don't like?  The meme of Kermit The Frog drinking tea. You know, this one: 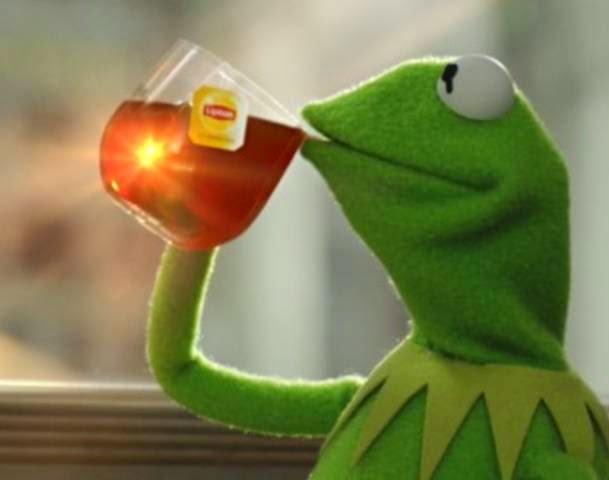 First off, why would anyone take a beloved children's character--heck, just an awesome character in general--and turn him into a passive-aggressive asshole? That's what Statler and Waldorf are for.

Second, most of the stuff that people make him say just seem petty and angry. It's the equivalent of "Just sayin'" or "I'm not racist, but..." which apparently are code words that completely negate all the horrible stuff you're about to say.

I mean, I get it. Memes aren't exactly a paragon of civil discourse, and you can't really make long, logical statements over a puppet frog drinking second-rate tea. Everything has to be reduced down to its core few sentences, and that hammers down any sort of nuance into nothingness. Allowances can, and have, been made, whether it's poor Willy Wonka (who never wanted to be seen as a condescending jerk*) or the socially awkward Dos Equis spokesman (who is the exact opposite of that! It's like y'all aren't trying!). But it's often just sort of small-minded.

It's very much like Twitter, where, yeah, some of it is great and all, but there are some things you can't reduce down to 140 characters and have any sort of meaningful discourse over. (Which is why mixing twitter and politics is stupid and why I rarely do it.) Trying to prove points via memes is kinda pointless.

In the end, you should really just use memes to make stupid jokes. Because that is why the internet, and memes, were invented.