The Nero Wolfe Project: From Please Pass The Guilt to Death Times Three

This is the tenth, and final, installment of the Nero Wolfe Project. 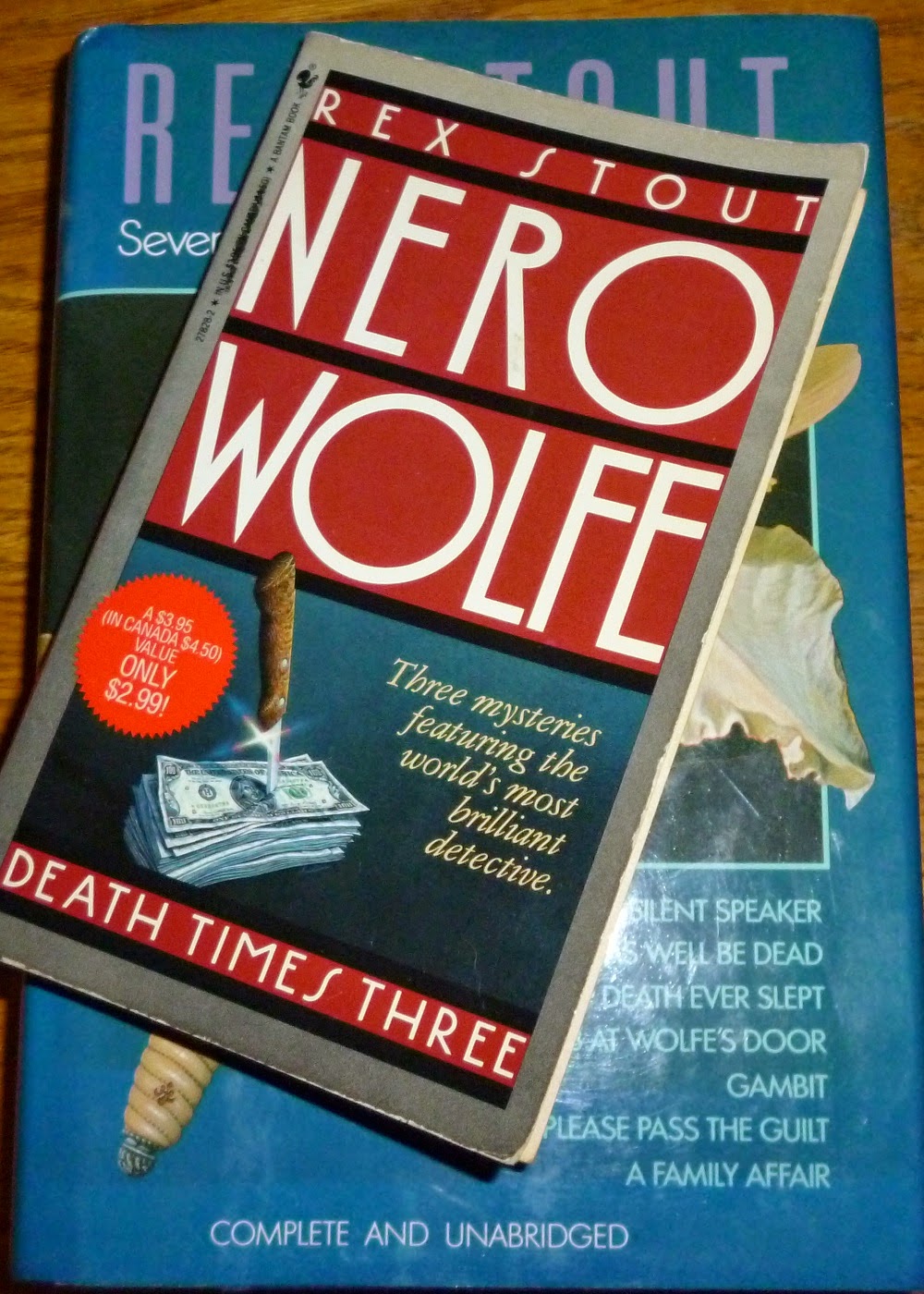 This time, we're going to be looking at Please Pass The Guilt, Death Times Three, and A Family Affair.

In Please Pass The Guilt, a doctor consults with Wolfe--one of his patients is having a recurring episode where he has blood on his hands. Reluctantly, Wolfe speaks with him, only for the patient to not give him any useful information and is summarily told to leave--but not before getting him to give up his name. Through this, they eventually find out that he was involved with a company that recently had a bombing; a candidate to be president of a company walked into the room of another candidate, opened the bottom desk drawer--which was known to hold the owner's whiskey from which he faithfully drank every day--and was instantly killed. Archie and Wolfe then net a fee from the victim's widow--the person who opened the drawer had a vial of LSD, and presumbaly was opening the drawer to lace his drink. The widow hires Wolfe to solve the murder without that fact getting disclosed. One of the better mysteries, and also a surprisingly candid book--a mildly graphic discussion about language (which seemingly does not advance the plot) is present, odd given that the series up to this point has eschewed things like that. Also notable is that the Wolfe universe has been brought, kicking and screaming, into "modern" times, with mentions of LSD, hippies, feminism, language, and the sexual revolution.

I'm cheating a little, here; we're going to skip to Death Times Three. This was published posthumously, and includes Bitter End, Frame-Up For Murder, and Assault On A Brownstone. Bitter End is a reworking by Rex Stout another non-Wolfe story, but it's certainly worth reading. It's one of the better short stories: it involves someone spiking canned goods with quinine, and Wolfe commits to uncovering the murder of the owner of the company out of pique. Frame-Up For Murder is simply a reworking of Murder Is No Joke (from And Four To Go); it's slightly expanded, but it's really not worth reading if you've already read the original. Assault On A Brownstone is a variation of Counterfeit For Murder (from Homicide Trinity); the first few pages follow the original story, but then takes a completely different turn. It's worth reading just to see the different possibilities from the same characters and settings. Because two of the three stories are variations on a previous story that was probably closer to what Stout intended, you can safely skip this book; only get it if you're a completest (or really want to rad Bitter End).

A Family Affair is the final Nero Wolfe book written by Rex Stout. When a waiter at Rustermann's restaraunt comes to Wolfe's office after midnight, demanding to speak to Wolfe, Archie demurs. The waiter, clearly agitated, mentioned that someone is trying to kill him; as a compromise, Archie allows him to sleep in the South Room until Wolfe has been advised and is awake in the morning. Not long after, an explosion goes off; Archie enters to find that the waiter is dead, killed by a bomb. Thus sets off a series of clues, linking the waiter to an electronics magnate who had died the previous week, and eventually another client. Sadly, I can't get into too many more details, because the major thrust of this book builds up to an alarming and depressing twist. This book was written during the aftermath of the Watergate scandal in 1974; it's a major plot point that it's suspected that one of the victims was somehow directly or indirectly involved in the scandal. It's hard to rate this one, since Stout was clearly writing it from a place of sadness and frustration, and he wrote it in his late 80s and had to know it was probably going to be his last book, or close to it. It does end with a certain level of finality, but not with a whole lot of closure; in fact, it's utterly depressing. In some ways it is quite a fitting end, but in others one has to wonder how optimistic it could have ended instead.

And that's it. Through 33 novels and 39 short stories, we've lived through Nero Wolfe, Archie Goodwin, Inspector Cramer, Fritz Brenner, and a multitude of other characters. For now, I'm skipping the continuation of the Wolfe line by Robert Goldsborough--by all accounts they're solid, if not excellent, novels, and some day I'll read them and maybe even review them. But for now, I'm done. I'll write up a more in-depth look at the series overall in a later post.


Posted by Crank Crank Revolution at 9:00 AM