What the hell happened to Japan?

It wasn't that long ago that Japan was on the rise. Japan was the future of the world, the flag-bearer of the post-Cold War landscape. Just check out the cover of Paul Kennedy's landmark book, The Rise And Fall Of The Great Powers: 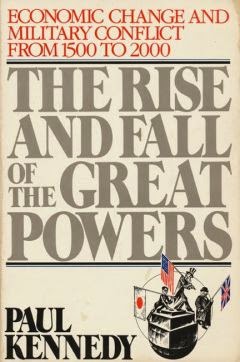 The UK is stepping down, the US is getting ready to, and Japan is climbing up. If you were around when this book was written in the late 80s, this was not an unusual thought.

The 80s were a good time for Japan, economically speaking. They were by far the fastest growing nation, and was rivaled only by the US when it came to size--quite a feat given the small size of the island. The 90s were not so great, as a recession (at the time casually linked to the US's early-90s recession) slid deeper into a lost decade of stagnation. That lost decade has just about spread to two decades, and the Japanese nation knows it.

There were plenty of theories at the time as to why things didn't work out, although one of the more common theories was that they were *too* successful--Japanese stakeholders ran out of things to put money in (deflation had forced interest rates to be near-zero) so they started investing in land overseas, which rarely ends well. That's right--they spiraled into a recession because they ran out of things to buy. Obviously that's not the only reason, and it's a lot more complicated than that, but that was a major factor.

The political landscape has been overhauled as well. Japan more or less was a one-party state from after the war until the 90s. After that, it was a disaster; Since 2006, Japan has had seven prime ministers (albeit with one repeat) and what was once one of the most stable democracies in the world is a mess.

The fact that Japan is slipping into yet another recession can't bode well for its future. Oh, make no mistake; Japan is not a failed state, and they're still the third biggest economy in the world. Japan's not going anywhere for a long time. Still, though, it's alarming how long their troubles have lasted, and one wonders how much longer it's going to be.
Posted by Crank Crank Revolution at 12:09 AM