The Interview: A Movie Review


By now, everyone knows about The Interview. The Seth Rogan-led comedy made headlines when its plot--an entertainment host and his producer go to North Korea to pull off the assassination of Kim Jong-Un--upset the government of North Korea, and the film was pulled from wide release when Sony, the movie's studio, was threatened. 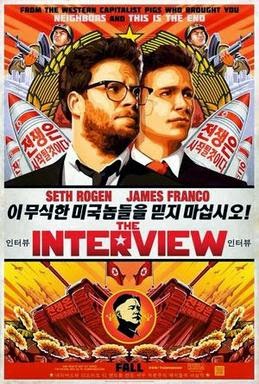 After some time, it was eventually released (in limited theaters) and then released online in a variety of sources. Eventually it got itself to Netflix streaming, where most people will no doubt watch it.

As such, I watched it a few days. After seeing the film, the best I can say is: "eh."

I won't rehash the plot, since it's more or less covered above. A shallow entertainment host, James Skylark (James Franco) and his producer Aaron Rapoport (Seth Rogan) are celebrating their long-running success, but yearn for something more fulfilling. When news leaks that Kim Jong-Un loves Franco's show, the two of them get in contact with the leader to do an exclusive interview. The CIA then gets involved, convincing the two to pull off an assassination of the leader, stating that they have a sympathetic faction ready to take control.

Once there, Skylark finds that he and Un have a lot in common., and he becomes sympathetic. Rapoport, on the other hand, has to figure out a way to pull off the assassination himself--and ends up falling for Un's propagandist. When Skylark eventually realizes how horrifying North Korea really is, the plan changes--by changing the plan. The globally televised interview, which normally would be pre-arranged questions, soon changes to piercing questions about the North Korean regime. A battle ensues, with the reformers taking control.

OK, when I say "piercing questions about the North Korean regime," I mean "fart jokes." This is--when you strip away the meta circumstances and the pseudo-political trappings--a Seth Rogan movie. The first half hour is pretty standard, with crude jokes mixed with some legitimately intellectual humor. It then switches to a surprisingly bland spy film. It finally turns into an action flick as the climax occurs.

And that is ultimately my problem with the movie--it doesn't know what it wants to be. It tries to be a buddy flick with crude dialogue, but also a political movie trying to make political points, and also a spy caper, and also an action movie. And it ends up doing none of these things particularly well.

A few highlights--Randall Park does an excellent job in nearly everything he does (notably in Veep), and here he manages the role of Kim Jong-Un delightfully well. James Franco, however, seems like he's just supposed to be a good-natured shallow individual, but instead he kind of comes across as a creepy man-child. Seth Rogan isn't really acting, he's just doing the exact same thing he does in every movie. If this script had been strung together with a little more foresight and weight behind it, it could probably have managed to be a legitimately funny yet politically insightful movie; instead, it just comes across as a boorish mess.

Don't get me wrong--I loved certain parts of it. It's by no stretch a bad movie--I laughed plenty throughout, and I'm glad I watched it. But as a whole it was very unsatisfying, not scratching a comedy, action or spy movie itch. It most certainly is not worth causing an international crisis over. So watch it, if you're into Seth Rogan movies, and even if you aren't it might be worth a pass, but beyond that it's not particularly memorable.