Why "The Office" Is The Best Sitcom Of An Era

Mass entertainment can often be difficult to judge; even more so when it's currently in production and fresh in our minds. And yet I feel a solid determination can be made: the US version of The Office is the best sitcom of the current era. 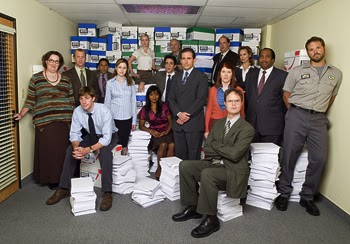 Oh, sure, there's plenty of great competition from the past 15-20 years, but I feel most of them have some critical drawback. Friends and Seinfeld both are solid, well-written, long-running shows with interesting characters, memorable episodes, and a critical collection of nostalgia, but they both seem freeze-dried in the 90s. Arrested Development will always have a place in my heart, but its short run will always be an albatross around its neck. 30 Rock is awesome, but it already feels dated and was too clever for its own good. Parks and Rec and Modern Family are still on and have the potential to be solid frontrunners, but we'll have to wait and see for both. Instead of maturing, most of the cartoon shows suffer from their long-running status. Other successful sitcoms around this timeframe--Everybody Loves Raymond, The Big Bang Theory, How I Met Your Mother, Two And a Half Men, and so on--are generally good but just don't differentiate themselves enough to be outstanding.

Of course, let's be honest: the last 20 years have not been kind to sitcoms. After The Cosby Show made sitcoms hip again, there was a flourishing of comedy from the 80s into the 90s, but around the end of the decade sitcoms were getting pushed over for dramas--mostly medical shows, reality TV, and police procedurals. You can hardly flip through the stations without bumping into a Law & Order rerun or a CSI spinoff. (This isn't all that unusual, by the way--the history of television tends to go in cycles. Hell, there was a time in the 60s when there wasn't a single night of the week when a Western wasn't on.)

At any rate, I'm not plucking The Office out of a decimated lineup just for the hell of it. My wife and I have recently been watching it again from the beginning, and it's astounding to me how fantastically written that show was. It wasn't perfect--we'll get to that in a bit--but I can't think of a single television program that manages to piece together sharp writing, interesting characters, and an easily accessible environment.*

Here's what makes The Office great:
The Office wasn't without its problems. Some of the plots got carried away with their own cleverness and wound up being more awkward than enjoyable. Once Jim and Pam got married, a huge driving force of the series seemed to wind down, and the writers had to concoct an ever-increasing number of situations filled with artificial romantic tension to keep things going, most of which were flat-out uninteresting. There were a few plot lines that really didn't seem to work--for example, the Michael Scott Paper Company story seemed to be more trouble than it was worth.

And Season 8 bears special mention; after the departure of Michael, Robert California (played decently by James Spader) just wasn't very interesting and his character was wasted. (In addition, most of the plots of season 8 stretched even the already-expanded levels of believability as far as they could possibly go.) They also wasted the character of Nellie (played by Catherine Tate), who could have been something amazing but they basically did nothing to develop her personality and she just came across as a weird bitch, and then when they did finally flesh out her character it was too late. On the plus side, after season 5 the introduction of Erin (and, to a lesser extent, Gabe) added a huge amount of just flat-out fun to the series.

Thankfully, season 9 picked up and the writing was on par with the series' heyday. Even with the departure of Ryan and Kelly, the addition of Clark and Pete (two decent characters that just didn't have time to contribute much) and a weird plot line dealing with one of the sound guys (which thankfully ended after a few episodes), the last season is not only memorable but fantastic. Those who understandably dropped out after the 8th season would be well advised to power through it; it's well worth it.

At any rate, why does this make it the best sitcom of an era? As I mentioned in the first few paragraphs, it's a series that is clearly of a decade but not defined by it; its appeal is largely universal; and, most importantly, it has the writing and the characterization and the execution to back it up. While it's only been off the air for a few years, it already seemed to have been able to stand the test of time--re-watching shows from over a decade ago don't seem dated in the least. I can't say for certain if The Office will be regarded as the Cheers or M*A*S*H of our time, but I suspect it will be pretty close.


*The only other candidate is the previously-mentioned Arrested Development, which I would rank a little higher. But as I said, with only four seasons--with two of them shortened, and the fourth an admitted awkward half-effort--it's hard to propel it higher than The Office.
Posted by Crank Crank Revolution at 1:45 PM