I, like a lot of nerds, enjoy Star Trek. So the passing of one of Star Trek's icons, Leonard Nimoy, is sad, if not exactly unexpected.

As far as Star Trek goes, though, I'm more of a Next Generation guy--it debuted when I was around 11, which is the sweet spot for watching dorky things in the 1980's. Unfortunately, DS9 bored me and by the time Voyager and Enterprise came around I just didn't have time to get into them, so my spectrum of Star Trek consumption is alarmingly limited. 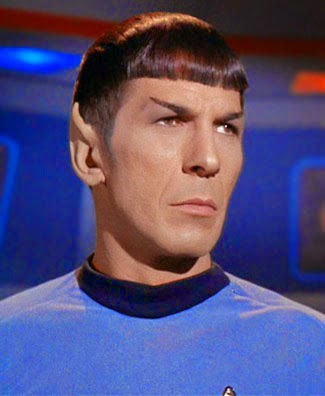 That leaves, of course, the original series (TOS). I've always had mixed feelings about that series: on the one hand, it's an enjoyable series that does a pretty good job of producing entertaining, thoughtful plotlines centered in a sci fi universe, all while utilizing a fantastic set of characters and actors and establishing a rich foundation of backstory. On the other hand, the scripts were wildly uneven, the production values iffy at best, and it screams "60's" right in your face. Watching it can sometimes be a chore.

And yet, Star Trek is important. It is sometimes easy to forget the impact it had on our culture. It wasn't just a weekly hour-long nerd-wank session on a major network. Star Trek deliberately aimed at breaking barriers and pushing culture forward, all under the aegis of being sci-fi. You had one of the first African-American females as part of a main cast; you had an Asian who wasn't a martial arts expert or a coolie or Mickey Rooney; and even the inclusion of a Russian in the almost-hot Cold War of the late 60's was fairly important. (Thankfully, we had Klingons to act as stand-ins for the Russkies.) Add to that the fairly easy allegories that could be made using alien races as proxies for whatever social issue needed to be addressed, and stir in some decent writing and you can see why it had such an impact.

Well, maybe not so much. Expensive to make and with ratings that were modest at best (although it did exceptionally well in the lucrative young male demographic, a science that was just then gaining traction), it barely stayed on the air for three years before unceremoniously cancelled.And while Star Trek was innovative, it certainly wasn't the first to push boundaries by transplanting hot-button issues into science fiction; The Twilight Zone and other similar anthology programs were doing it a decade earlier.

But let's stop beating around the bush, here. Star Trek has stayed in our consciousness for a number of reasons, but one of them was the trio of characters (and their actors) that headed the show. William Shatner took James T. Kirk and made him into the able archetype of the action-oriented, aggressive captain and took exploring new galaxies to their logical conclusion. In addition, the logically-minded Spock, portrayed by Leonard Nimoy, and the cranky but diplomatic McCoy (DeForest Kelley), in combination with Kirk became an almost perfect triumvirate of personalities that many other television shows and movies copied.

It's easy to oversell it, of course. Star Trek took the brunt of a lot of jokes in its time, laughing all the way to the bank but never really being able to shake the whole reputation of being a nerdy, unpopular genre. It took decades of Star Wars, Lord of the Rings, and a few generations of video games and role-playing acceptance before converting into an acceptable, mainstream cultural phenomenon.
Posted by Crank Crank Revolution at 1:17 PM