At first glance, thing are looking up. The gag on the cover is pretty solid: a medium burger! Ha! The tag line ("meaty jokes to be devoured with relish!") is corny enough but at least gives us an idea of what we're in for.

Sadly, it all goes downhill from there.

First, off, it's notable that this was written by one person. This was back before the internet, so there wasn't someone who was scraping internet sites looking for jokes about hamburgers. There was literally one guy who sat down one day at the typewriter and pounded out exactly 101 jokes about hamburgers. What can we say? It was the late 70s. That sort of shit happened.

To be fair, the illustrations were done by Don Orehek, so that meant that ol' Phil could concentrate on burger jokes and didn't have to dither around with ink and paper.

What is the hamburgers' most familiar song? "Home on the Range"!

Not bad. Next one is about the same:

When do hamburgers most enjoy watching TV? During prime time!

OK. A little awkward--that's a punchline looking for a joke--and I could do without that condescending underlining, as if only slack-jawed morons would be enjoying a hambuger joke book. Yeah, "prime" is a word used to grade meat, we get it. You don't have to be a slaughterhouse jockey to understand jargon like that. But otherwise it's not a bad joke.

But check out the third joke:

How do you make a hamburger green? Find a yellow cheeseburger and mix it with a blue one!

Now, stop the train, here. What? That joke doesn't even make sense. Why would 1) anyone ever want to make a hamburger green, and 2) is there really such a thing as a blue hamburger? They made a saving throw with the yellow cheese on the burger, but...what sort of setup is that? It's not even a hamburger joke, that's a "what happens when you mix primary colors" joke. Why would you ask how to make something that doesn't exist, and the punchline be something that also doesn't exist? Madness!

It just gets worse. I'm not going to run through all 101 jokes, but let's take a random sample:

Why do burgers laugh when you surround them with pickles? Who knows--maybe they're picklish!

Who is a hamburger's favorite comedian? Milton Broil! (Berle)

THANKS FOR EXPLAINING THAT, PHIL! I thought there was an actual comedian out there named Milton Broil. Also, is there a pun with "tenderloin" that I'm missing? I mean, I get that they're trying to say "Burgers tend to do [something] faster than pizzas or hot dogs." But what is the something? Lie around? Loiter? Lean? I don't know, and all of the answers are equally unfunny.

Most of the jokes (I'm not going to be an asshole and put that in quotes) rely on puns, and that's OK--I'm appreciative of a good session of wordplay. But there's only about a half dozen terms he uses, and just re-uses them in different ways. It can be quite tiring. There's only so many ways you can re-word "Well done," "hot dog," "bun," "meat," and "loin."

There's also a lot of jokes that aren't really jokes at all, even in the lame-pun category. Take a look at this classic:

Why does Farrah Fawcett-Majors love hamburgers? Who knows--but we just wanted to mention her name! 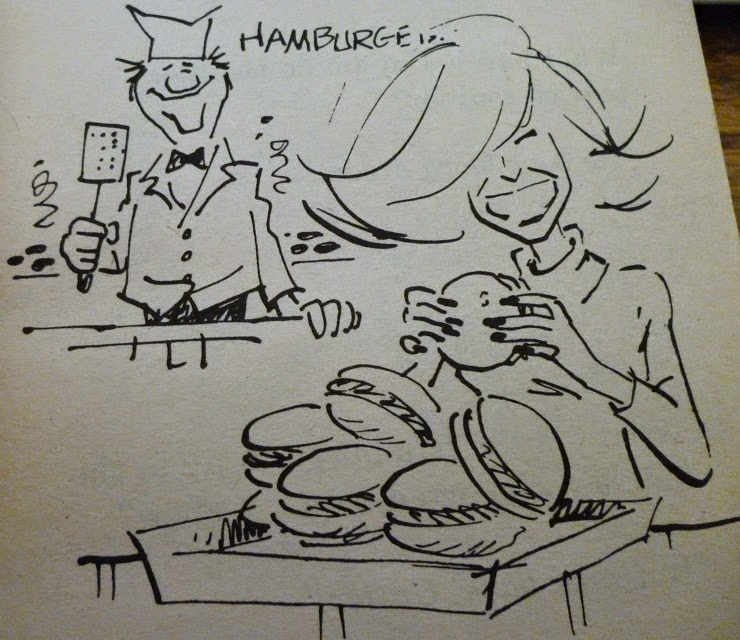 Just remember, folks: there was a time in America in which it was culturally acceptable that simply name-dropping Farrah Fawcett was the minimum threshold required to quality as a joke. This is why ISIS exists.

There's also a section called "Rare Vampire Jokes" (get it?) which include these gems:

Which singer's records do they play at hamburger joints in Transylvania? Fang Sinatra's!

What did the Big Mac say when the Vampire attacked him? "You're a pain in the neck!"

How many burgers do you feed a ferocious, 14-foot-tall vampire? All it wants!

What the hell? These aren't even hamburger jokes! They're lame vampire jokes with an unsubtle hamburger reference thrown in. Did Phil run out of steam around joke 80 and just say "Screw it, the kids won't figure it out?" That's hardly professional. I was promised "101 Hamburger Jokes," not "A Modest Amount Of Hamburger Jokes Plus Some Other Stuff That Ultimately Add Up To 101."

But it's not all bad, of course. Here are some halfway decent jokes that stood the test of time:

Who can you always rely on in Burger Land during an emergency? Hamburger Helpers!

What kind of girl does a hamburger like? Any girl named Patty!

Which burger is famous for his long nose? Cyrano de Burgerac!

That last one was thrown in for all the classy intellectuals browsing the meat-based joke section of the local library.

But that's not enough to save this book. Everything can be encapsulated by the back cover: there's a drawing of a snooty-looking hamburger, complete with top hat, cane, and monocle, sticking his nose up in the air. The joke?

How does a Burger acquire good taste? With a little seasoning!

That's it? That's the showstopper? That's what you're putting on the back cover of your book to move copies off the shelf? It even just barely makes sense--even back in the 70s, using the phrase "seasoning" for refined upper-class snobbery was already a bit of a stretch. There's some decent jokes in there, but they chose something devoid of sense and humor as the marquee knee-slapper.

Still, I can't be too hard on the book. It was a product of its time, I suppose. I'd like to say I'm not its target audience, but that's an excuse. And yet I still recommend it for one fact and one fact only, and that is due to this joke along with the accompanying illustration:

What do hamburger say on Monday morning? "Well, it's back to the old grind!" 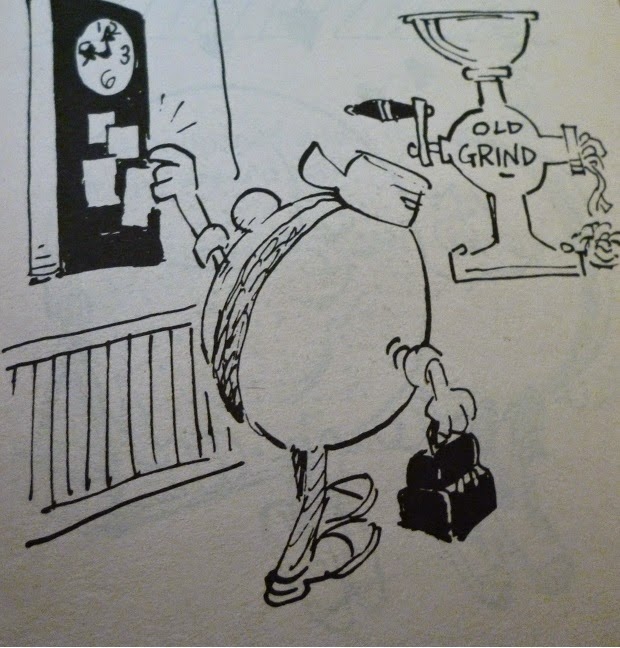 It makes structural sense, it's a decent pun, and it actually has something to do with hamburgers. More importantly, it shows a cheerfully-sketched hamburger willingly trotting off to what will be the certain death of fellow hamburgers, gleefully grinding them to a pulp for a paycheck.  It's a sad commentary of the malaise of the Carter administration, as well as a proper dose of reality subtext in a tome peppered with frankfurter jokes.

Puns, perspective, and pathos? Now, that's a joke we can all laugh at.
Posted by Crank Crank Revolution at 9:00 AM