I'm not sure, but I may have uncovered a conspiracy of monumental proportions.

This very night, my wife and I enjoyed the first smores of the season. I opened a box of graham crackers, which are my favorite snack because they have the audacity to call themselves "crackers" when they are quite clearly cookies, and looked inside. Now, I'm not about giving away free advertising on this site--I don't care how tasty you are, ya still gotta pay--and I also don't want 1) to be sued for libel because of this forthcoming post and 2) I don't want the Illuminati to use keywords to track me down. Let's just say they are a major graham cracker manufacturer whose name rhymes with "Bunny Laid."

Anyway, I pull out the first package--for some reason graham crackers are packaged in three different wrappers because apparently some marketing genius somewhere doesn't think people just eat all three packages in one sitting--and I noticed something peculiar. 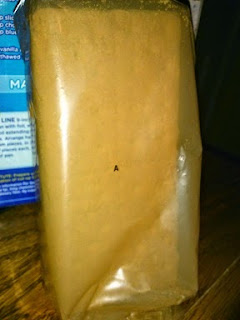 What on earth is this? (One mystery that doesn't need solved is why it looks like someone ate half of the crackers in this pack. It wasn't me. Mystery solved. Let's move on. Ahem.) It's a regular pack of graham crackers, but right in the middle of the package is an "A". So I pulled out the next one. 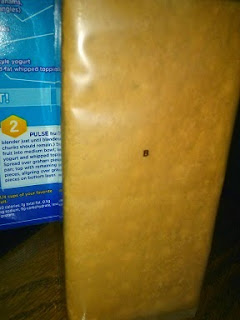 A "B"? What sort of Brave New World nonsense is this? But there's a third package in the box. What mysteries will it sing for me? 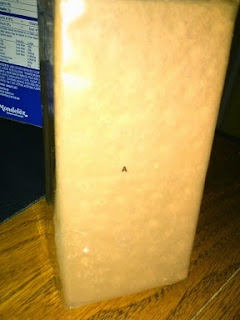 An "A" again. What sort of devilry is this?

No, seriously, I have no idea why this is the case. If there is one thing that the Bunny Laid corporation loves more than making tasty treats for the eagerly hungry public, it's not spending stupid money to stamp a Ariel letter for no reason on their packaging. More importantly, all three packs were the same. Same number of crackers. Same color, flavor, everything.

I could understand maybe lettering them "A", "B", and "C", but they didn't do that. They went back to "A". Why? It doesn't made any sense from a packaging standpoint, or an inventory standpoint, or really any sense of logic whatsoever.

Anyway, I have some theories:

1. There are people being held hostage in the Nabisco Rabbitsco bakery but they think that there is a two-thirds chance that the only person who can rescue them is the Fonz.
2. Graham crackers have gained sentience and are working their way through Richard Scarry's alphabet books.*
3. Big Cracker is trying to send out a coded message with the laziest cryptographer ever.

In any case, it may take a while to solve this mystery. Maybe the cinnamon crackers have different letters. I hope so, because now I'm hungry again. This is going to be the tastiest Da Vinci Code-style mystery-solving shit ever.


*I'm not sure if Richard Scarry Alphabet Books are a thing, but that seems to be the sort of thing graham crackers would be up for. Weirdos.