A Thousand Points Of Crank

You want cranky? I've got cranky.

1. I don't know why, but some time in the last year or two it's become increasingly common to spell the word "paid" as "payed." Why? Grammar mistakes are nothing new, but I swear everyone knew how to spell that particular word right up until last year. Did someone famous tweet that spelling or something?
2. I think I'm done with superhero movies. I mean, most of them aren't bad, and Marvel is doing some good work, but enough is enough. I think we've hit the saturation point--well, probably a few summers ago.
3. Marlon Brando was kind of a dick. He's a mediocre actor at best, anyway. What's the big deal?
4. I've been playing the mobile game Simpsons: Tapped Out. It's a pretty mindless game involving no decisions that nevertheless is strangely addicting. However, they recently introduced a bizarre system where you have to "build" stuff in 1, 2, 5, and 8 minute increments--normally it's in hours, so you only have to check it a few times a day. But now to do it right you basically have to be doing it constantly. Who the hell wants to do that? I'm doing it, of course, but boy is it kinda stupid and may end up ruining it for me.
5. Just as I get on an egg kick, the price of eggs skyrocket. Come on, birds, what do you have against me? Besides me eating you.
6. I am already annoyed by how people are reacting during this election cycle. Which sucks, because I love politics. But I'm afraid to write anything about it or voice any opinions about it.
7. I saw this on CNN.com today:

and I totally thought it said Hitler was killed in a likely bear attack. And my first thought wasn't "I must have read that wrong" but was "Surely they don't mean Hitler Hitler, right? Maybe it's some other Hitler, like a singer or something. That visits zoos or something."
8. Daytime television is the worst. The worst. It's so vapid and horrifying. Also: people who microwave fish at work. The worst.
9. I know it's boring and routine to complain about how people drive, but other people drive like idiots. I'm at the age now where driving a few miles over the speed limit is a perfectly reasonable act, and yet I just feel the death stare of indictment from people behind me because I make a conscious choice to not go 85 in a 45 zone.
10.I've complained about driving and food, so why not go for the trifecta? The weather, man, what a disaster. There hasn't been three straight days this summer where it hasn't rained...until this past two weeks or so, where it's barely rained at all. Hey, I don't mind the rain--love it, in fact--but I'm getting tired of mowing my lawn every three days. (Ha! That's a lie. I just stare at it after three days and complain about how awful it looks and then postpone mowing it for like another two weeks.) Anyway, I can't wait for fall.

Edit: Holy cats! I was right! Right after I posted this, I noticed someone else posting something similar. Sure enough, CNN.com screwed up: 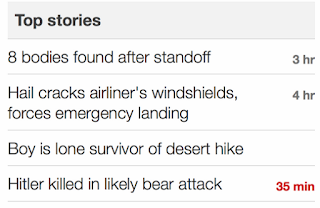 CNN.com is just a pawn in the time-traveling animal-assassin cabal that's clumsily attempting to cover its own tracks.
Posted by Crank Crank Revolution at 10:33 PM