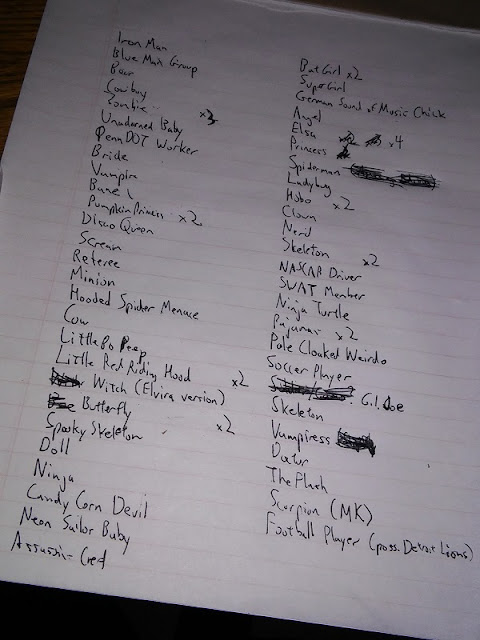 Trick or Treat in my neighborhood was last night, and I decided to write down all of the costumes I saw.

For the record, here's the list:
A few notes:

As I've mentioned before, I'm not really into comic books. No reason; it's just a nerd blind spot for me. And I don't hate them, I just never really got into them

So far I have watched all of the movies up until The Avengers, which closes out the first phase. I'm not going to claim these are classics--in fact, most of them fit the definition of big, dumb, clumsy action flicks. And that's okay.

The good news is that the MCU has done a pretty good job of weaving an interesting, thematic thread through each of the movies. Sure, you have your obvious macguffins and dialed-in personal arcs, but in the end it's all made right with a bunch of smashed-up cars in downtown Manhattan.

Still, I can't help but point out some things that just bother me:

1. Tony Stark is an asshole. I'm not taking about a lovable, snarky, sarcastic ladies' man. He's just a jerk. I know people are supposed to like his attitude, but it just screams immature adolescent. I don't find him enjoyable at all.

2. Thor (and, for that matter, Loki) seems out of place. In a world where everyone else is a superhero pretty much by superscience, here's a Norse demigod with a toolbelt. I'm sure there's some super secret comic book reason for this (and I can't fault the movies since they're just following the comics), but I just can't quite meld the two. The movies at least make an attempt to handwave this away by claiming that magic is just science that people don't understand, but still.

3. Everyone is pretty much invincible. Even amongst the Avengers, Hulk and Thor are evenly matched, and Captain America and Iron Man are also evenly matched as long as they have their toys. Hell, even ScarJo and Mayor Carmine seem indestructible even though they're just highly trained professionals with unrealistic hand-eye coordination without the benefit of a lab accident. The villains, of course, are equally invincible. There's far too much of each movie that basically boils down to two of the characters beating the ever-loving shit out of each other with little to no consequence until the audience is going to get bored and then mysteriously one of them has had enough and gives up. Without a compelling kryptonite (sorry, Marvel) to serve as an Achilles' Heel (sorry, Greek mythology), the narrative of victory and defeat basically doesn't exist.

Still, these are things that could develop--I have to get caught up in Phase Two which is still currently being created. I eagerly await.
Posted by Crank Crank Revolution at 6:23 AM No comments:

So one of my friends recently posited this question: why do Wal-Mart and Target have such different reputations and feel so different despite the fact that they are functionally the same?

At first glance, it seems absurd: Target and Wal-Mart and clearly different. And yet they aren't. They're still both department stores and they have roughly the same layout and floor plan. So why the marked difference?

There's a few theories, some more obvious than others:
I'm not sure if this answers the question, but I think it points to the right place.

Posted by Crank Crank Revolution at 12:00 AM No comments:

Reasons Why I'm A Hopeless Dope, Part 1 of Infinity

So over the past year or so, I have heard a song. A specific song, mind you: it's one I heard fairly often, maybe once every few weeks. What was unique about this song was that I only heard it in grocery stores.

This, of course, means that I could barely hear the song. I couldn't hear the lyrics at all, except for some snippets here and there.

I would stop in my tracks in the middle of the cereal aisle, annoying the harried moms and gray-faced teenage stockboys as I tried to make out the words so I could look it up later.

Of course, this was always a random encounter; I couldn't just look it up, I had to be wandering listlessly in a dump truck of a grocery store before I could even attempt. It's like a burglar walking down the street trying car doors and hoping to get a score. Only instead of rattling doorknobs I was buying pumpkin filling and instead of larceny I was trying to figure out a half-remembered song.

I've only been able to make out one bit of lyrics, which are "Wake me up." That's it. Standing there, cart in hand, eyes squinted towards the speakers in the ceiling, all I could come up with is "Wake me up mummmmble mummmmble."

Anyway, I heard it earlier this week and I was determined to find out what it was. I went online and asked people. I hummed it to myself, trying to translate the humming into words so I could type it up and the magic computer machine would spit out an answer.

And then, suddenly, it occurred to me. I typed in "Wake me up" in a browser and the answer immediately came up. For months, this never occured to me.

And that's a reason why I'm a dope.

Here's the song, if you're interested, by Avicii, called "Wake Me Up." I'm not much into EDM but I'll take what I can get. (For the record, this hit #4 on the Billboard, which should tell you what I know of popular music.)


(By the way, this isn't the official video, because the official video is kinda weird and has dialogue between the stanzas. It's easy enough to find if you're interested, but Vevo stamped their name on this so I'm assuming the royalties somehow make it to Sweden in either case.)