Board Game Review: Dead of Winter

Dead of Winter is a semi-cooperative game from Plaid Hat Games about the impending zombie apocalypse. 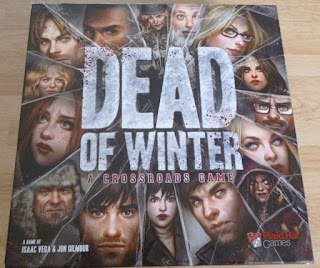 Each player directs a group of survivors trying out outlast a series of crises. Food, fuel, tools, shelter--maintaining the standards of simply staying alive is part of the challenge, but so is blasting away at the hordes of zombies that are knocking politely at the door.

First off, the game is highly customizable: the objective in each game is slightly different, so there's no one way to play. You may be trying to collect samples to find a cure, for example. In addition, players can play fully cooperatively or play with a traitor. Finally, each player has their own secret mission they have to fulfill in order to win the game.

However, some things are constant. Each turn, players are trying to resolve an immediate crisis. There are Crossroads cards (which we'll get to in a minute) that can be triggered. Players can stay (relatively) safe in the Colony, but will eventually have to go to the outlying buildings (like the library or the police station) for supplies, risking getting attacked.


During each turn, the current Crisis is turned over. This requires a certain amount of resources to be devoted to it--one Food per person, perhaps. Each player then rolls dice equal to the number of Survivors they have, plus one. Then each player takes an action.

Actions are varied; players can attack zombies, attack another survivor, search a location for supplies, build a barricade, clean up waste, move zombies around, playing cards, moving survivors, and a few other options. Some of these actions require dice of a certain value to be spent; some require any die, regardless of value; and some don't require dice at all. These dice are pulled from the original die rolls at the beginning of the turn.

After all players have taken their turns, the Colony Phase begins. 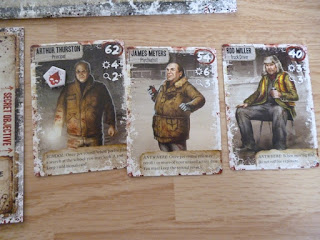 First, players have to pay food. If there isn't enough food to feed everyone, morale decreases. Waste is then checked; waste is simply the discard pile, and if it starts accumulating, it causes morale to decrease.

New zombies are then added, which may cause further deaths and heartache.

There's a lot more to it--people bitten can spread the zombie disease, searching for more stuff than normal in the outlaying buildings may attract additional zombies, etc.--but I won't go into all of the details. Two highlights, though: one is the Exile concept. If players believe that someone is a traitor, they can be voted out of the colony. They are restricted in certain actions then and must stay out of the Colony proper. However, they also get a new goal card which they can use to win the game.

Play continues until the game ends. This can be in a victory (the original objective is met) or defeat. Defeat happens if either morale hits zero or the turn track hits zero. 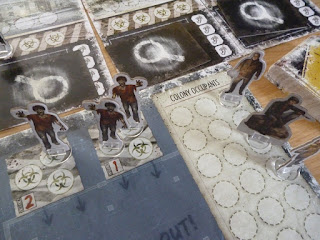 What I liked about the game:

What I don't like about the game:
Dead of Winter won all sorts of awards, including Game of the Year, for various places, and I tend to agree--it's clearly worth the hype. I understand that it is not to  everyone's taste, however. My point above about interesting decisions is a point of contention for many who would disagree--a lot of people feel the multiple singular goals ultimately make the game's decisions meaningless. (I also think the "innovation" of the Crossroads cards isn't all that great; I think it's a neat mechanic but not a game-changer in the world of design.) While I can understand that, I don't fully agree--and I'd have to rate this game a solid A.
Posted by Crank Crank Revolution at 9:00 AM