Exploding Kittens is a card game based on the comics of Matt Inman from The Oatmeal. 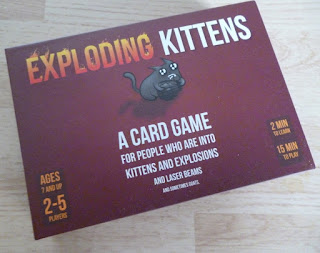 If you aren't familiar with the comics, you can look it over now (most of it is fine but some is NSFW). It sort of defies description. He has a huge and loyal following, evidenced by this game's success. It was launched on Kickstarter with a modest goal of $10,000 and it ended up with over eight million dollars and was the third highest funding of all time.

So the question is: was it worth it?

The object of the game is to not draw the Exploding Kittens card. That's it. 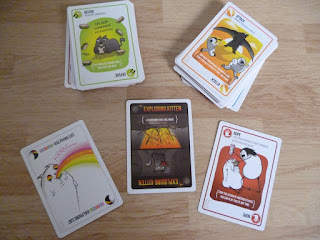 OK, there's more to it than that. Players take turns playing cards from their hand. Ultimately, you are doing your best to avoid having to draw the Exploding Kittens card, and each card in some way helps you to prevent it. Some cards allow you to look at the cards on the top of the deck. Some cards allow you to shuffle the deck, or mess with other player's hands. Some cards have no description, which you can play in pairs to steal a card from another player. Basically, everything allows you to manipulate the game to do everything possible to avoid drawing the Exploding Kittens card.

If you do draw an Exploding Kittens card, you can prevent it from affecting you by playing a Defuse card. If you don't have one--you're out of the game. Play continues until there's only one player left.

Many board game and card game purists won't like this game (and are certainly jealous of its monetary success), but I enjoy it. It's not something I would want to play repeatedly in one sitting, but it's a perfectly acceptable filler game--and, as I mentioned, does have some strategy. While I think there are some missed opportunities, there's also a god chance of overcomplicating it. This game works best in its simplicity. I grade it a B.
Posted by Crank Crank Revolution at 9:00 AM