Board Game Review: King Of Tokyo

King of Tokyo is a board game designed by Richard Garfield (of Magic: The Gathering fame) and published by Iello. 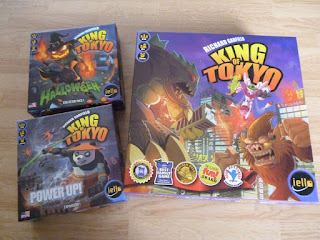 Each player represents a monster poised to ravage Tokyo: maybe you are Gigazaur, the mighty lizard, or Mekadragon, ready to burn down civilization. However, Tokyo is only big enough for one of you at a time--who will it be?

Each player takes turns rolling five dice, Yahtzee-style, until the desired result is reached. (Players roll all the dice, and then can choose dice to re-roll up to two additional times.) Dice have different numbers or icons, each depicting some specific benefit. Lighting bolts allow a player to collect energy, which can be used to buy cards. Claw icons represent attacking another player. Heart symbols represent health. And the numbers 1, 2, and 3 represent points that can be scored if you can get at least three of them. After a player resolves their dice, they can collect energy and buy cards if they wish.

Players are trying to reach 20 points. However, if they run out of health, they are out of the game.

The main trick of the game is Tokyo--at any given time, only one player can be in Tokyo. Being in Tokyo confers two benefits: every turn a player begins in Tokyo nets two points. In addition, any attack that is made by the monster in Tokyo is applied to all other players not in Tokyo.

However, it also has a main drawback: a player can't heal while in Tokyo. And any player outside of Tokyo who rolls a Claw will only have that apply to the current resident of Tokyo. So, basically, if you are in Tokyo, you're the only player taking damage (except what you yourself deal out) and you don't have the ability to heal. So at some point you'll want to give up Tokyo and let someone else get sandbagged for a while. 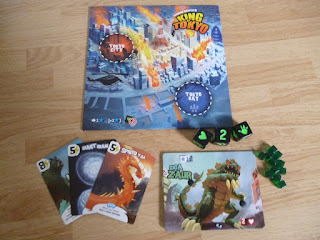 (Note that in the picture above I have the two expansions: Halloween and Power Up! Halloween just adds some new cards and new monsters and some minor rules. Power Up! allows the customization of your monster by addition special abilities. I haven't played these enough to really review them, but they definitely add to the game without making it overly complicated.)