Snake Oil is a party game by Out Of The Box Games. 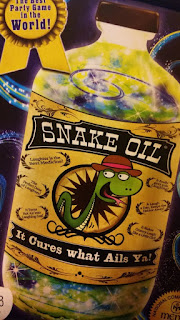 In this game, each player takes a turn being a "customer"--the customer is some sort of profession ("Teacher"), character ("Santa") or other demographic ("Dumpster Diver"). Every other player serves as a pitchman. Each pitchman has a hand of cards with various words on them, mostly nouns (things like "Toy," "Armor,""Space," and "Cheese") and each player combined two of these cards to make an item to sell. For example, a player may attempt to sell Cheese Armor (combining two of the words above) or perhaps a Diamond Whistle or a Rainbow Garden, all keeping in mind the target. A Diamond Whistle might be an easy sell to a Diva, but not so much a Priest.

The Customer then selects the player who made the best pitch, and they score a point. The player with the most points after a set number of rounds wins!

What I like about the game:
What I didn't like about the game:
I rate this a good A-. My fear is that it can easily be replaced with a lot of similar games, and if you don't have players who enjoy this sort of thing it can fall flat. This is more the fault of the group and not the game, though.