Time's Up! Title Recall is a party game published by R&R Games. 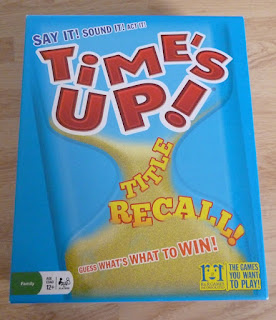 Play is similar to Password: the cluegiver is trying to get their teammate to guess the title. Players can say or do anything to get their teammate to answer correctly. (There are a few obvious restrictions, like not using part of the title in the clues given.) Each team has thirty seconds to go through as many cards as possible. After thirty seconds the unguessed cards are passed to the next team. Repeat this process until all the cards have been guessed.

On the third round, the cards are shuffled again. This time, the cluegiver can only use gestures, similar to charades.

Teams score each round based on the number of cards they guessed. Highest team wins! 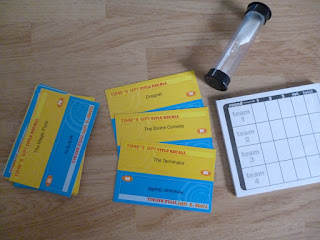 What I liked about this game:
What I didn't like about this game:
I grade this an A-. If there are people who aren't into pop culture, they're going to have a tough time with this, and people who are clearly uncomfortable with charades will probably hate it, so it's not a game for everyone. But this game is probably tied with Say Anything as the best party game I've had the most success with.
Posted by Crank Crank Revolution at 9:00 AM