What's Yours Like? is a party game by Patch Products. 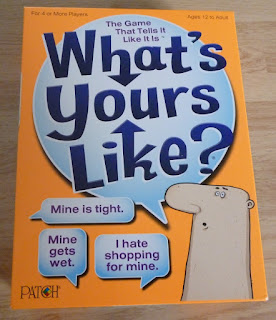 Each turn, one player is trying to guess a word or phrase that relates to people--for example, "my house" or "my pet." A card is drawn and passed to all players except the guesser, and the guesser goes around asking each player "What's yours like?" The other players then have to make a truthful statement about their object, but not so revealing as to give it away immediately. The guesser has to piece together all of the clues until they can accurately guess the word. Scores are based on the number of guesses, so the lower the better. 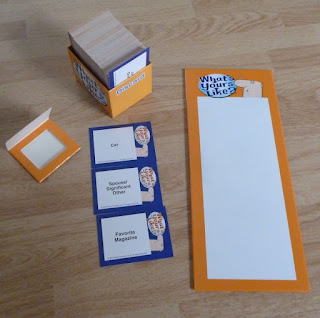 That's it--it's a pretty simple concept.  It's almost like a reverse Password, where everyone has their own "answer."

There are easier party games out there to play, but this one is unique and interesting. I like the fact that it plays off of a common party game concept without overly complicating it. I'll give it a B.
Posted by Crank Crank Revolution at 9:00 AM