Are you over the age of 10? Do you enjoy learning about witchcraft? Did you live in a house that didn't keep sweet? Do you enjoy movie franchises that start off weak and piddling and then get incredibly awesome? Then you've heard of Harry Potter and the signature candy* Bertie Bott's Every Flavor Beans. 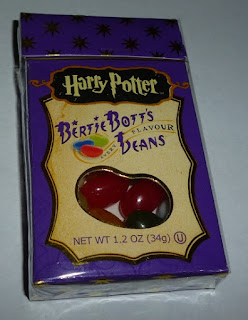 I have no idea what marketing wizard** came up with this idea, because it's disgusting. In the Wizarding World of Harry Potter, apparently when you hit the age of 11 you want to cram horrible flavors into your mouth like you have some sort of vomit-pica. No, seriously, there's a bean flavored like vomit. That's not a joke.

As some of you may remember, I did a video review of Bean Boozled, which is more or less the same concept: a mixture of delicious jelly beans mixed with gross ones.

To Bernie's credit, this little box of nightmares didn't try and trick you. In Bean Boozled, there were two different flavors of the same color; if you picked up a green one, it could have been apple or it could have been boogers. (I don't remember, exactly, what the flavors are because I've been trying to forget that it ever happened.) In this product, there's no such tomfoolery: you know if you're popping some earwax into your mouth or not.

For the interest of full disclosure, I didn't try all of the gross ones in this box because I've already done this horrible, horrible thing already. (I didn't try any of the tasty ones, either, because I'm not taking any chances). I only tried the ones that weren't in the previous box, which were mercifully few: sausage, dirt, and black pepper. They tasted exactly how you would think, although I will admit that black pepper wasn't nearly as bad as it sounds. The sausage was disgusting, to the point where I truly believe that this piece of candy I just ate is more disgusting than the actual making of real sausage itself. Dirt is just gross. (For the record, the other gross ones I haven't mentioned yet are booger, earthworm, rotten egg, and soap.)

Do I recommend this? Only to say that you have done it, or to win a bet.

I don't want to know the depraved things that happens at Hogwarts that would make Bertie Bott's beans a sweet, actively-sought-out release. Voldemort must be harrowing, indeed.