Invisible, Inc is a PC game designed by Klei Entertainment, the same company that brought us Don't Starve. 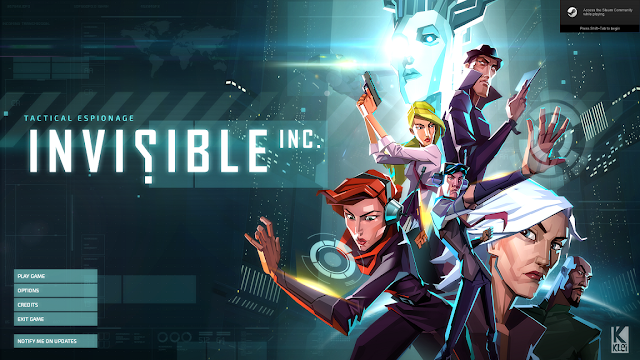 I don't do a whole lot of video game reviews, simply because most of the stuff I buy is stuff that's been around for like a decade and I'm picking it up for five bucks in a discount bin (or, more realistically, a Steam Sale.) But I'm making an exception, here, because this game is relatively new.

The game takes place well into the future in 2074. Corporations have taken over from international governing agencies, and Invisible, Inc is an independent espionage agency to run missions for the Corporations. However, at the start of this game the entire enterprise is compromised, rendering them without resources and forcing them to go rogue against the major Corporations.

All that backstory is to justify the main thrust of the game: you will travel across the globe and carry out a series of missions with only a handful of agents. You'll have limited resources and even less time.  In your favor, you have Incognita, a powerful computer system that can easily crack through the (tech-based) defenses of the Corporations, Central, the head of the agency helping to direct you, and you also have Monster, a rogue trader who can provide you with much-needed goods for a price.

Missions are carried out in a turn-based manner, where agents have a set amount of action points they can use to move and do other tasks. They can sneak past guards, crack open safes, hide being obstructions, and drag prone bodies around to prevent detection. Guards can be knocked out for (usually) three turns by zapping them with a close-range device, although there are plenty of opportunities for ranged weapons and lethal weapons (both of which make missions easier, but are costly and can cause additional problems.) The core of the game is this tactical element of evading detection, carrying out the mission, and--most importantly--balancing getting out alive with getting more stuff to help in later missions. 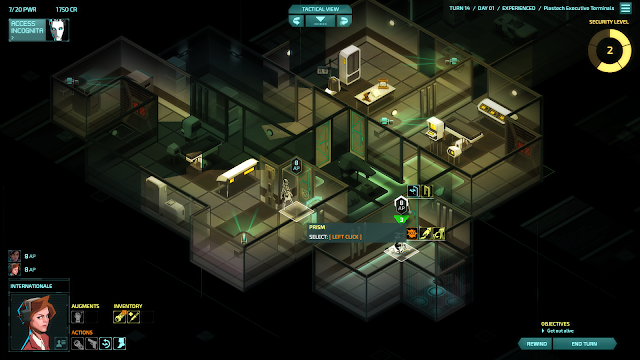 An "alarm" system that steadily increases each turn--and increases if you are sighted or cause other issues--will also create increasingly difficult challenges for you, so the longer you bum around the harder things are going to get.

Each mission has a specific goal in mind, and they're gloriously varied. Some missions are simply stealing credits from a vault. Sometimes it is to get a highly valuable weapon. Sometimes it is to rescue another captured agent. And sometimes it's to upgrade Incognita with more powerful programs. There are eight different missions in total, each with their own difficulties and rewards.

You also have ten Agents to choose from. When you first start playing the game, you only get two, but as you play more games you unlock new characters. Each one has their own strengths and weaknesses. Internationale can see certain electronic items in a radius, even through walls. Dr. Xu has a handy tool that can disable traps and electronics for a turn. Banks can unlock most locked doors without a key. And so on. Each character has stats that can be upgrades--Strength, for example, allows that character to carry more and can drag bodies quicker, while their Anarchy allows them to steal from guards without alarming them and using items more efficiently. 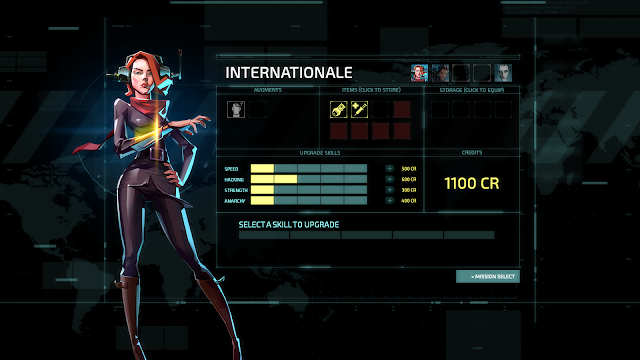 Characters can also get augments, which are (more or less) permanent advantages that don't use up an inventory slot. This might mean making weapons more effective, or sprinting after a successful attack, and so on. There's a limited number of augment slots per character, although you can get more.

Items can be purchased, stolen, or otherwise found during the missions. Items cover a wide range of effects, from more efficient melee weapons and guns to lock decoders and portable servers. You'll need a variety of items and choose them carefully since Agents have a limited amount of space to carry stuff.

Finally, Incognita operates in sort of a mini-game during each level. Incognita can break through "firewalls" to take control of cameras, break open safes, redirect power sources, and a host of other items. Breaking these firewalls costs Power, and there's only so much Power per mission--thankfully, Agents can drain power from consoles found on each level (as well as other sources). As the game progresses you can upgrade the programs she has to be more efficient with her Power and to provide additional abilities, like causing disruptions to divert guards.

You only have 72 hours to accomplish all this; Incognita can only run on reserve power for a short time. Part of the game is managing the clock--every flight you take subtracts more hours.

Ultimately, each of these missions is really just preparing you for a final mission, where you take control of a base to install Incognita, who can presumably help stabilize everything. This mission is really, really, difficult, and jumps up several levels in difficulty from any of the previous missions. You have to have top-level Agents filled with useful gadgets and augments to even have a chance at this last mission.

While I find the game too difficult to the point of sad frustration, that doesn't mean I don't like the game. Even failed missions tend to be fun. The price point is just about right for the amount of fun you have with it, so I find it hard not to recommend it.
Posted by Crank Crank Revolution at 9:00 AM