It's been a while since I've had a Static and Noise post, mostly because I'm lazy, but the Trending News on Facebook came to the rescue! 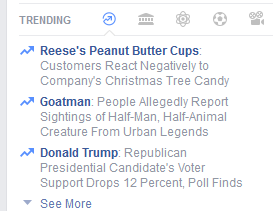 Peanut Butter Time: Apparently, people are upset about the shape of the Reese's Peanut Butter Trees--as in, they aren't tree-like enough. I'm not sure if this is whimsical-social-media-upset or big-corporate-takedown upset, because the media has been making this out to be World War III. In any case, have these people never bought a seasonal Reese's candy before? The trees look like tree-like globs, the pumpkins look like pumpkin-style lumps, and the Valentine's Day Hearts look vaguely like people's hearts after they eat a dozen Reese's Valentine's Day Hearts.  At least the Easter Eggs are oval-shaped to everyone's satisfaction.

Goatman: Apparently "Goatman" is a thing. I assumed that the concept of the goatman started and stopped with Jim Breuer, but apparently not. Apparently, there have been multiple sightings of goatmen around in different states (Wisconsin, Kentucky, and (of course) Texas), which leads me to believe that this is either a well-coordinated prank or weed got legalized secretly and early in quite a few states. I've always been skeptical of modern, home-made urban legends like this, like Slenderman, The Rake, and Carly Fiorina, for no other reason than the internet has kind of made this sort of thing cheap and easy. I prefer my urban legends to be forged in Boy Scout Troops and fax machines, thank you.

Stump The Trump: I haven't been writing about politics lately (in case you haven't noticed) mostly due to one thing: Donald Trump. Regardless of how you feel about him, it is practically impossible to bring him up without starting a firestorm--and bringing up any other politicians is immediately held up against what that means for Trump. Trump has taken all the air out of the room, and it's exhausting, so I don't bother to engage. So news like this is good for me--politics is always contentious, but he's a force multiplier. As nearly everyone predicts, I expect he'll be done with his little vanity campaign by the time the primaries start. One can hope.