Most of you know that I own two dachshunds, Chloe and Dexter. They are cute and loyal and sassy and two of the biggest little shits you've ever seen.

Today I decided to grill some steaks for dinner. 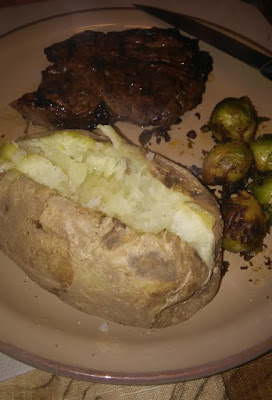 Now, normally when we eat dinner we eat with our dogs. As in, we sit at the dinner table and eat while the dogs eat their dog food. However, this isn't an equitable arrangement: Dexter wolfs his food down like the Wiemar Republic is right around the corner and Chloe is such a little priss that she eats when she, and only she, wants to. So the end result usually involves us eating dinner like normal human beings while our dogs run around like the end of the world waiting for a morsel to drop so they can lick the floor for twenty minutes straight.

We very rarely feed them from the table because we don't want to live with monsters (This is a lie. We feed them french fries and other horrible things to them all the time. We live with monsters) but things do occasionally slip out. It's rarely anything of note, and we do have to make sure that the other dog gets an "accidentally dropped" piece of food of roughly equal portion or else all hell will break loose.

Anyway, this is something that's been going on for years. Not every day, but most days, the ritual is the same at dinnertime: a brief moment of reflection, staring at one's self in the now-empty bowl, followed by frantic anticipation and ending with disappointment.

Anyway, back to the meal: I had eaten everything on my plate except one last bite. It was a nice-sized chunk of steak, the savory last bit where all the juices and flavor goes. I was licking my lips, Warner Brothers-cartoon style, about to place it in my mouth. I was then asked to pass the napkins, which I did...only to see my last delicious cube of meat tumble to the floor.

Dexter immediately sprung to action and swallowed it whole. I don't even think he chewed.

I was understandably upset. But then I got to thinking: how does this feel for Dexter? Here he is, waiting day in and day out for over five years for something--anything--to happen. Each day is a new opportunity for something to happen, and every day he goes to bed disappointed. And here it was, after years of patience: it was like manna from heaven. Juicy, delicious steak-manna from heaven.

It couldn't have been a carrot or a brussel sprout or even a bit of potato skin: it was the Gold Standard of Dog Appetites. All dogs want steak. And last night, all of Dexter's prayers were answered. He finally got what he wished for.

And, in according with the Canine Fairness Act, Chloe also got a piece of steak. Smaller, to be sure but with an additional, more important difference: hers was given, not taken.

Of course, he immediately stared running around and wagging his tail and barking for what I think was approximately three decades. There is no doubt in my mind that he felt invincible. We had to put him in his crate (I unceremoniously called his crate the "cooler"--for him to cool off) just in case all of the excitement would cause him to vomit. (Although let's be fair, it wouldn't be out of character for him to double down and have steak a second time.)

Dexter, who after years of prophecy, finally found his salvation.
Posted by Crank Crank Revolution at 7:15 PM