Zak McKracken and the Alien Mindbenders

Over twenty years ago, I booted up one of the best adventure games of all time.

Zak McKracken and the Alien Mindbenders was an old Lucasarts adventure game. It was the follow-up to the highly acclaimed Maniac Mansion.

Our protagonist, Zak, is a reporter for a Weekly World News-style tabloid and is sent to write a report on a two-headed squirrel. It just so happens this squirrel is near Mt Rainier, the site of the first UFO sighting. Before his departure, Zak has a dream that foretells much of the rest of the story: he sees a girl, a machine, and some aliens.

While in Seattle, he uncovers a strange statue that has a crystal. The game pilots you towards dumping this artifact on a local researcher, Annie, who turns out to be the girl in Zak's dream. It turns out that she had a dream about him as well, and also saw the same machine--and so kicks off the rest of the story.

The game has Zak and Annie--and, eventually, Melissa and Leslie, two coeds who travel to Mars (don't ask)--traveling the world trying to find out why they were sent to build this machine, and uncover a plot for aliens to take over the world. Spread out throughout this story are a bunch of the old tropes you see from the tabloids--gray aliens, the Face on Mars, Atlantis, Stonehenge, and even Elvis sightings. 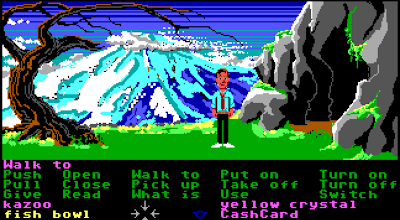 I'm bringing this up now, because after almost a decade of searching I found a decent way of playing it. ZMatAB was a game that sort of fell through the cracks--it didn't have the same cache as Maniac Mansion, which spawned a sequel and a short-lived television show. It didn't have the long-running status of the Monkey Island franchise. Buying it via conventional means was relegated mostly to the a relatively rare collection of games. You can play it for free here, although you'll have to scrape up the copy protection somewhere. You can also buy it off of GoG.com with better graphics.

It shows its age, but not nearly as bad as I expected. This was early in the development of the LucasArts games--LucasArts made a point of installing plenty of anti-frustration measures in their later games. It's hard to die in ZMatAB, but not impossible; sadly, it is possible to render the game unwinnable with some easy-to-make mistakes. There are several mazes in the game, done primarily to lengthen the game without eating up a bunch of memory. (By today's standards, it's needless busywork.) There's a lot of awkward accounting involved--since certain characters can only do certain things (and only have so much money), and that you can only travel from certain cities to other cities, there's a lot of flying to a city for the sole purpose of giving a ticket to someone else because they can't afford it and/or can't make it from Point A to Point B.

Still, I'm impressed by the storyline. The writers did an excellent job of weaving a consistent, logical tale that makes very little sense in the beginning but becomes increasingly more coherent as the game progresses. The puzzles aren't hard but put up a decent enough challenge. The humor is decent and not overplayed. On replay, small details that made little sense before make perfect sense. I don't want to spoil too much on the off chance anyone wants to play it, but things that seem like the weird, illogical things that happen during adventure games actually make sense.

Anyway, this was one of the few times that my trip down nostalgia lane didn't end up in disappointment.
Posted by Crank Crank Revolution at 9:00 AM