From Zanzibar to Barclay Square

I had a minor pop culture meltdown earlier today.

Sadly, Patty Duke passed away recently. Any time I am confronted with such sad news, I tend to do what normal people do, which is make a slightly tasteless joke on twitter about their passing.

My downfall, though, was that I didn't know all that much about Patty Duke aside from the fact that she had a sitcom in the 60s about having a twin. I mean, I watched the show when I was a kid, but me being a kid involves a world where the Soviet Union was still a thing. It's, uh, been a while. So all I had were fuzzy black-and-white memories of something that might have been about a mildly attractive girl who had a lookalike with a different accent and some rudimentary camera tricks that would make the crew of Bewitched shake their heads in shame.

So my lame-ass joke boiled down to something like "Has anyone told Patty Duke's twin the sad news?"

I was promptly told by my friend Dana that--well, her response was simply "cousins." For a moment I was confused, but then I got it--did Patty Duke play not lookalike sisters but cousins? That can't be the case--that's genetically impossible! That's insane! Maybe we were just wrong.

After extensive research by spending ten seconds looking it up on wikipedia--whoops, it looks like she was right. Patty Duke had a twin cousin!

That is stupid. Even by the 1960's-talking-horse-sitcom standards, identical cousins is a stupid, stupid idea. The Patty Duke Show was built on a foundation of sand and lies!

The biggest shame--the theme song! I don't remember the theme song, but apparently when I was a kid I blacked out every time the theme song came on the TV. The lyrics go roughly like this:

And of course following the rules of the early days of television, the theme song was repeated enough times that even the slowest of viewers would get a hint of what was going on.

Now, growing up, old sitcoms were my bread and butter; not having cable will do that do you. So when I am challenged in my knowledge of nostalgic old sitcoms, I get defensive and cranky. I can tell you who the deputy was after Barney Fife (Warren) and I can tell you that Jeannie used to flutter her eyes before the more iconic folded-arms-and-nod to activate her powers, but I'll be damned if I let some improbable genetic mutation sully my memories.
Posted by Crank Crank Revolution at 9:00 AM No comments:

Let's get this over with right off the bat--today, we're going to be talking about pissing our pants.

My wife recently forwarded me the web site for a product that falls under the official Dave Barry "I Am Not Making This Up" category: underpants designed to handle peeing your pants a little. 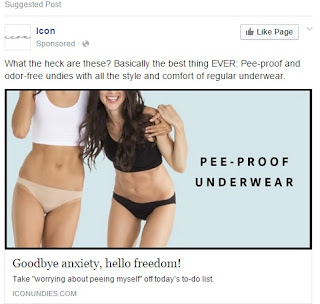 Of course, you can't just tiptoe around such a sensitive subject; the web site is loaded with urine-based puns (sign up to be a VIPee!) and indirect yet obvious references to the unfortunate vagaries that are the stuff of women's inside piping, which as far as I'm concerned is a mystery wrapped in a riddle.

Here's the thing: I get it. There is a market for this sort of thing, and the internet in particular is a fantastic place to be able to produce these things if you want to be discreet about it--or have it plastered on every single ad space you have for all to see on your personal computer, as it did for me when I visited the web site and got to see those banners above for like three weeks afterwards. But the web site treats the issue with just the right balance of whimsical aww-shucks-ness, Serious Business, and attractive design to make you want to buy potty pants.

(More to the point, the pants are designed to help a specific condition, fistula, which sounds like a kinky vampire but is really an actual concern for women who have given birth. So, yeah, I'm making fun of it, but I get the point.)

My main gripe is that it's marketed for women. How about us guys? Sure, we don't have as much of...a biological issue as women do, but for those women readers who aren't aware...well, have you ever kinked a garden hose? And has said kinked garden hose ever really stopped all the water at once?

But there's also other reasons why we might get a little drip here and there:

1. We might be too lazy to get up to piss when watching six episodes of Better Call Saul and an unexpected cough arrives.
2. We might have just drank 40 ounces of Diet Dr Pepper and shortly thereafter get a surprising push on the gut by a small child or a large dog.
3. We might be watching Russel Wilson throw to Ricardo Lockette instead of pass to Lynch for WHO KNOWS WHAT REASON YOU SON OF A BITCH.

So good for you, Icon, for filling a market need and doing it with style, sprinkly though it may be.
Posted by Crank Crank Revolution at 9:00 AM No comments:

No Rest For The Stupid

1) A truck going down the highway with what appeared to be a dozen mattresses rather haphazardly secured in their bed passing me on the left; and

2) Several minutes later seeing three mattresses strewn along the highway and said truck pulled over the side of the road with the driver in a state of panic.

If you want to wonder if karma ever reached what was almost certainly an underground used-mattress smuggling operation, mere seconds before I saw the mattresses on the road a state cop passed me. I strongly suspect he helped get the mattresses off the road. Then perhaps the driver of the truck and him had a little chat?
Posted by Crank Crank Revolution at 10:44 PM No comments:

A Deal At Any Price

You know what I love more than witnessing the slow but inevitable downfall of Western civilization? The aiding and abetting of rogue AIs in that process.

And what more fun could there be than the Amazon pricing algorithm. Readers, look upon this fantastic deal and one-click buy your way to infinite amazement! 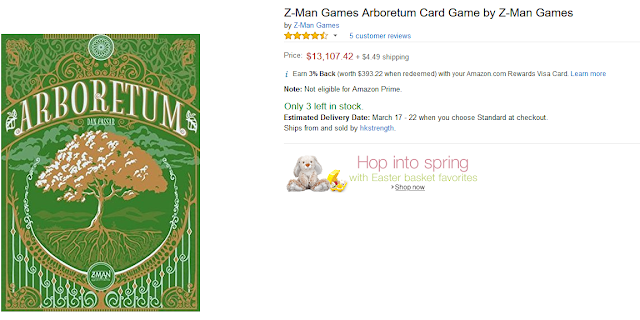 (For the record, the price has changed, like, three times in the last ten minutes before I snapped a screenshot.)

Helpfully, Amazon lets me know that:

For the record, Arboretum is out of stock, but only recently, and its retail price is normally $12.99. It had a solid but otherwise unimpressive rating of 6.669 at boardgamegeek.com. Better get it in your cart while you can!
Posted by Crank Crank Revolution at 3:37 PM No comments:

My current guilty pleasure* is Whistlestop, a podcast about historical presidential elections.

I've always been fascinated by campaigns. Obviously I love history and (not so) obviously I love politics, but just learning about the personalities, the trends, the gaffes, the opportunities--it's all so interesting to learn what people like and hated and let sway their opinions. Saying phrases like "Rum, Romanism and Rebellion" or "Ma, Ma, Where's My Pa?" to an old history nerd like myself will get you the appropriate response in return**, so you can both talk about WIlliam Jennings Bryan in the corner while everyone else at the party is getting laid.

The podcast takes a single aspect of an election and tells the story behind it. Hosted by Slate magazine and narrated by the wry, amusing, and authoritatively John Dickerson of Face the Nation fame (so he's legit and all), they tend to be about a half hour where he delves into the details and the framework of an election.

Previous episodes include the infamous "Dean Scream," the inability of Mario Cuomo to jump in the race, Ed Muskie crying like a little girl, and Bill Clinton feeling your pain.

Even if you aren't a fan of either politics or history, I suggest listening to an episode or two. They are entertaining in and of themselves and aren't just dry bits of history chopped up for ease.

It does sadden me a bit to know that in anther generation or two, an episode of Whistlestop (or its functional equivalent) will be talking about the size of Donald Trump's penis. So goes the nation, and all that.


*Apparently, I don't know what "guilty pleasure" means. Listening to a historical podcast is rather enlightening, don't you think? It's not like I'm streaming Kim Kardashian Nudes on my phone. Well, not at this exact moment.