The much-anticipated next installment of the DC Expanded Universe opened this past weekend, to somewhat dismal reviews but decent box office numbers. I contributed to those numbers, and my verdict: A pretty good movie.

Warning: Mile spoilers ahead. But nothing particularly important or that you can't deduce from one of the three thousand trailers.

Also, fair warning: I'm not familiar with the source material, here. If you're looking for an assessment of the fidelity to the cartoon or comics, you aren't going to find it here. Go to one of the thousands of comic-book fan wanks sites out there for that. Take this review as someone who has a tangential relationship, at best, with comics. 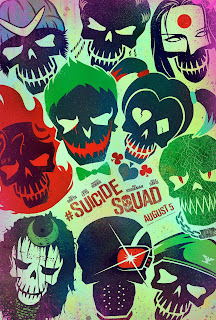 The plot is relatively basic, if a unique spin on the superhero movie. Intelligence agent Amanda Waller proposes creating a crack team of "metahumans" made up exclusively of bad guys. By being expendable, they can be sent on high-risk missions to combat other metahumans (sigh) with zero guilt, with the promise of a reduced sentence and not getting killed as incentives to do the mission.

The upper brass, skeptical at first, immediately approves the project after a violent disturbance wrecks most of downtown, and the Suicide Squad is activated. The group consists of mentally fragile Harley Quinn, high-end hitman Deadshot, the mysterious Enchantress, the pyro El Diablo, the cannibalistic Killer Croc, the master thief Captain Boomerang, and escape artist Slipknot. They are lead by Colonel Flagg (who has the detonator that will blow up any necks of members who try and escape) and joined by bodyguard Katana.

Where's Joker, you may ask? Well, the Joker is around, hatching a plot to get Harley Quinn out of the mission and into his arms. (OK, that might be a bit overly romantic for two crazypants villains, but you get the idea.) He shows up periodically to stop the squad with the singular mission of rescuing his girl, but otherwise isn't a member.

The Enchantress (spoiler, I guess) very quickly goes rogue and ends up being the very thing the Suicide Squad is fighting against. As the group inches its way towards the panic in the city, they endure internal strife, a few escape attempts, a little bit of self-reflection, but mostly shit gets blown up.

First things first: I liked this movie. I thing the mediocre reviews have some points, but the bad reviews seem to be out of a bit of spite. (We'll get to that in a moment.) The concept is nice, the acting is well done, everything works to its logical conclusion with just enough surprises to make things interesting, and the concept of "good" and "evil" are toyed with even if they aren't particularly deep.

Still, there are some valid criticisms. Overall, the movie clearly has some pacing and dialogue issues; rumors that it was hastily recut after the dismal reception of Batman v Superman, if true, clearly show. Characters arrive suddenly, some exposition is unnecessary and then completely ignored for other, more important things. None of it breaks the movie, but it's noticeable.

One issue right off the bat is the character introductions--each of the first six villains are given introductions ranging from less than a minute to two or three minutes--add that up and that's 10-15 minutes of exposition right off the bat. It's a little overwhelming. And throughout the movie the constant reminders these are the bad guys gets a little tiring--as is the rather contradictory notion that at least Deadshot is a good guy, given the screen time they spend on his relationship with his daughter. It's not a bad idea, but it stands out to the one-dimensional characterization they give, say, Killer Croc and Captain Boomerang, both of whom are barely more than mild ethnic jokes.

The "surprise" of the Enchantress escaping and becoming the big bad is also a little forced--it would have flowed much easier had she just been the enemy from the beginning, and making the catalyst the releasing of her heart (just...never mind.)

But once the movie finds its groove, it flows pretty well--it certainly doesn't feel like its two hour length. Even when the Joker shows up (a plot thread that, in the end, contributes nothing to the overall story) is still fun; Jared Leto's performance is good enough that you don't really care.

The movie is carried, ultimately, by Will Smith and Margot Robbie. Both characters soak up the screen time, taking huge bites out of the scenery, and loving every minute of it. Their performances make you forget about the plot holes and the odd pacing, which is impressive. While Leto's appearances were fairly interesting, he just wasn't in it long enough (and ultimately incidental to the plot) that he's, in my mind, clearly third place, if even that.

All this ends with a movie that ends up being a solid B, maybe even a B+. The characters are interesting, the plot, while a little shaky, is pretty standard for comic book movies, and the performances are good enough. Tightening up the script and maybe re-editing the re-edit would have done wonders, but as is I was pleasantly surprised.

Now, after that assessment, we have to hold this movie up to the mirror of the Marvel Cinematic Universe. Marvel has done so well for so long that they've practically become the gold standard of the modern superhero movie--their only sin, as yet manifested, is oversaturation* When done, Suicide Squad pales quite a bit. When you see what could have been done, it's rather disappointing.

I have a ton of ideas that I think Marvel would have done better (mostly involving the Enchantress, whom we spent way too much time on for her to end up the villain and fleshing out the Joker), the big missed opportunity was waiting. For a movie like this, it would have infinitely been better had DC made a few movies first, introducing the third-tier roster of villains over time. They might not be more than cameos but they'd establish the characters (requiring less exposition) and also make people anticipate it more. I understand that the point of the Suicide Squad was that they weren't top-tier characters, but still--Marvel knows how to balance fidelity to the comics with making interesting movies.

In the end, I recommend it fairly heartily. My main gripes are generally of the "what might have been" category, and Suicide Squad is hardly the only movie guilty of that.

*and maybe Thor: The Dark World
Posted by Crank Crank Revolution at 7:52 PM