Part Of A Complete Election

So General Mills is holding an "election" for their halloween-centered cereal mascots. You know who I'm talking about: Count Chocula, Boo Berry, and Franken Berry.

Seriously, you should check out the web site, because it's hilarious. They even have an electoral college set up to see who is going to win. This is what it looks like right now: 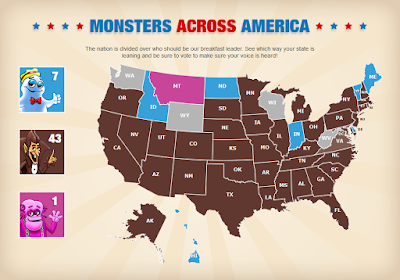 First off, what's with Montana? You guys must really like your artificial strawberry-style flavoring.

Secondly, are we going to see a fourth party insurgency by the likes of Fruit Brute, or, even more unlikely, Yummy Mummy?

Finally, I've been trying to pin down how these three fall into the standard two-party-with-third-party-challenger system, and I'm coming up short. Maybe you guys could help.

Count Chocula seems to be the establishment favorite. He endorses chocolate, which is the standard-issue blatant pandering giveaway issue of the times. He's also ambiguously foreign. ON the other hand, he's clearly being bought, paid for, and encouraged by General Mills as the iconic voice of the monster cereal cartel, so Big Cereal has got their grubby hands all over his candidacy.

Frankenberry seems like he's a scion of science, and it literally took a village (of corpses) to create him. And yet for all his practical inventiveness, he's largely concerned with always being first, leaving all others behind.

Boo Berry is kind of an enigma. He seems to say nothing and stand for nothing. Heck, he's practically invisible and yet seems to have solid support in the northeast and west--and legend has it that people in the south have created Boo Berry Consortiums during the off season, so he clearly has grassroots appeal.

I know this seems like a sponsored post for General Mills and their ad campaign, but come on--after reading this, you want to eat ALL OF THE CEREAL.
Posted by Crank Crank Revolution at 11:05 AM