Codenames is a party/word game, designed by Vlaada Chvátil and published by Czech Games Edition. 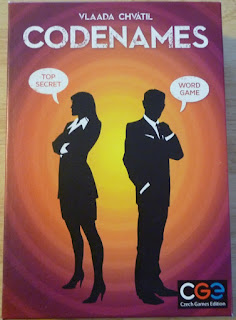 Each team's Cluegiver is attempting to give a one-word clue, along with the number of words it applies towards, to their team members. However, they need to say a clue that will not cause them to select one of the rival team's words; in addition, one of the words is the "Assassin" which will cause the team who chose it to instantly lose.

For example, here is a sample layout: 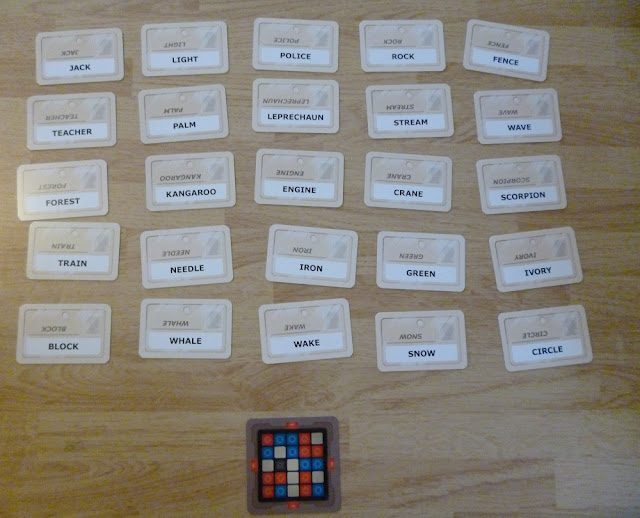 The grid at the bottom determines who owns which word; so, for example, the top row has Red owning "Jack" and "Rock" while the Blue team owns "Light" and "Police". Neither team owns "Fence". This applies to the entire grid. The Assassin word is "Kangaroo".

The Cluegivers take turns giving a one-word clue along with a number for how many words the clue applies to, and the first team to get all of their words correctly guessed wins. If a player selects a neutral word, their turn is automatically over. And if they guess the other team's word, they get the credit! So Cluegivers are trying to maximize the number of guesses per clue (since it is, in effect, a race to see who guesses their clues first) while also trying to prevent them from guessing wrong.

For example, the Red team might say "Nature, 3" in an attempt to get them to guess "Stream" and "Rock" and possibly "Green" or "Snow"...but their team may also guess "Forest" which is a neutral word, or, worse, "Scorpion" or "Whale" or even the Assassin word "Kangaroo", which are both Blue words. Likewise, the Blue team may have difficulty having their team guess "Leprechaun" without having them also choose "Green".

Teams generally can't simply do a bunch of one-clue answers, because the moment a team can get two in one guess, they're going to win as long as they keep alternating.

The game continues until one side has all of their clues guessed, or a team chooses the Assassin.

What I Like About The Game:
What I Don't Like About The Game:
This is one of the few games that falls under the "I would play this any time I am asked." Setup is very quick, play is quick, and everyone is engaged the entire time.  It's also got wide distribution in retail stores (namely, Target) so should be easy to pick up.