Hit Z Road is a board game designed by Martin Wallace and published by Space Cowboys. 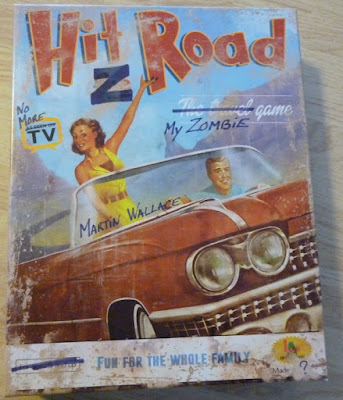 Hit Z Road has players each taking the role of a group of survivors trying to get across the United States amidst the backdrop of a zombie apocalypse. It is largely a push-your-luck dice rolling game with some elements of resource management.

Each turn has three phases. First, several routes are laid out. This is done by drawing from a deck of cards that becomes increasingly more difficult, and creating four routes of two cards each. Players may look at the routes; since the cards, and the order they are in, are random, different combinations of cards can make routes of differing difficulty.

Each card has several elements, not all of which are included in each card. There are Resources. Resources come in three types: Bullets, which allow you some risk-free attacks; Gas, which allows you to bypass a conflict; and Adrenaline, which helps kill extra zombies and save survivors. You simply pick them up. Cards may also have special abilities and victory points. Finally, there is usually a number indicating how many zombies will be attacking.

Players bid for turn order, paying what they have in resources of any kind for the final bid.

Then, each player chooses a route--so if you bid first, you get first pick of the routes.

Each player then resolves their route in the order indicated. Resources are simply collected, and special effects are assessed as needed. 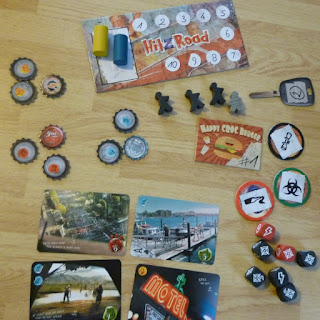 To fight the zombies, a player first decides if they want to spend any Bullet resources for a ranged attack. Every Bullet resource they wish to spend allows them to roll two dice; unlike the melee fight (which we'll get to shortly), all negative effects can be ignored.

After the ranged attack, the player rolls dice equal to the number of survivors they have for their melee attack.

The die results are:
Occasionally you may be required to roll a Horde die on the more difficult cards; these dice replace the blank side with a Horrible Death, which causes a survivor to die with no chance of saving them.

A player continues to roll dice until either all survivors are dead (and they are out of the game), or all the zombies are dead. Then, the next player chooses their route, and play continues until all routes are taken. A new round then begins.

There are a few other minor rules--there are tokens to pick up that grant bonuses or penalties later in the game, and as players are eliminated some of the routes become more expensive to take. There are also bonuses for the end of the game for the player who has the most of each resource.

Play continues until all players but one are eliminated, or the players reach the end of the deck and then the player with the most victory points wins.