One Night Ultimate Werewolf is a social deduction game designed by Ted Alspach and Akihisa Okui and published by Bezier Games. 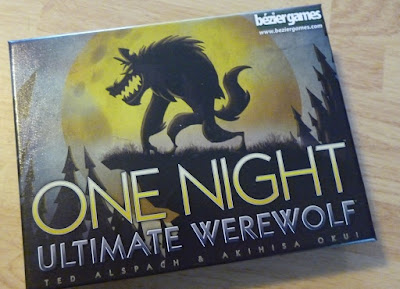 If you have ever played one of the classic "social deduction" games such as Werewolf or Mafia, this game is very similar. Basically, each player is assigned a specific role--a villager or a werewolf (or mafia). Then, each turn, there is a "nighttime" where the werewolf mafia don kills someone, and then everyone votes on who they think the werewolf is. The discussion over the vote, and how people vote, gives clues as to who may be doing the killing. Usually, there are other roles, such as a Doctor who can save people from dying, or a Sheriff, who can arrest someone. This continues until either all of the werewolves or mafioso are dead, or if the werewolves outnumber the villagers.

One Night Ultimate Werewolf takes all this and reduces it down to one turn. There's only one "night" where someone dies and only one "day" where people vote. This is all accomplished via an intricate maze of conflicting and supporting roles that maximize the amount of clues given by the discussion made after the day.

Because of this, games are by definition short--under five minutes, most likely.

Of all the Werewolf variants, this is probably one of the best--it's clean, it has some depth to it, and isn't overly onerous on the player to remember a bunch of stuff. While some people may prefer the successive turns of voting--I kind of do--it's a perfectly reasonable version of the concept. While I won't say it's my favorite social deduction game, it's up there.
Posted by Crank Crank Revolution at 9:00 AM