Have you died of dysentery yet? Well, you will, with the Oregon Trail Card Game. This is a Target Exclusive game published by Pressman Toy Corporation. 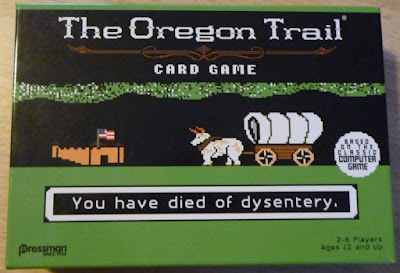 Oregon Trail is a light card-based game based on the classic 1980's era computer game that was endemic in elementary schools everywhere. There were plenty of versions, but they all had the same goal--get a group of pioneers from Missouri or Oregon by making sure their supplies were in good shape, they were able to keep everyone fed and clothed, and made hard decisions as to interacting with nature. Famously, the game could be unforgiving, as players could die without warning (almost always from dysentery).

The card game takes all this, makes sure you are aware of the nostalgia factor, and cobbles together a nice, light, quick game about it.

The game's presentation is pretty nice. It's all pixelated, so you definitely get the 80's PC game feel. You even get to write down everyone's name on a leaderboard (not unlike the original) and, when they die, their names are erased and placed on gravestones on the back of the board. It's completely unnecessary and awfully fun. 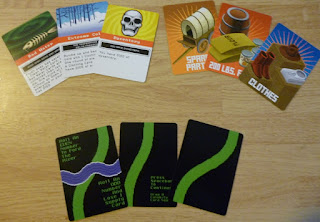 Players take turns building the trail by playing a Trail card. The trail must be able to match up with previously laid cards; if unable to do so, they must draw a new Trail card instead. Some trails cards have no effect; some require you to ford a river (which may cause you to lose a Supply card); and some will cause a Calamity to happen.

Calamities represent different things that can happen on the trail--losing a wheel, an ox dying, diseased water source, that sort of thing. You can alleviate these by playing Supply cards. Clothes, for example, can prevent players from freezing in the Extreme Cold. Some Calamities can't be countered and will result in a player's death.

You may also come across Forts or Towns, which act as "wild" cards and let players draw new Supply cards.

The goal is to reach Oregon by playing fifty Trail cards.

What I Like About The Game:
What I didn't Like About The Game:
It's a quick, cheap game that's a pretty good crowd-pleaser; however, I'd classify it more as a party game than a standard strategic card game. It's not very deep, so don't go into the game expecting it to be, but for the right price and the right crows it's a decent enough game.
Posted by Crank Crank Revolution at 9:00 AM