The Internet Ruins Everything

One of the very few brights spots from this post-election haze was the emergence of the Joe Biden memes, where good ol' Diamond Joe has a few things to say about the election results. I'm partial to this one: 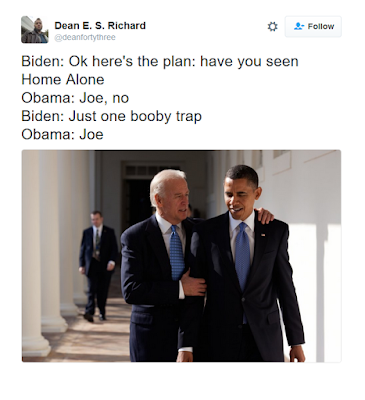 Building off of Biden's personality, these things are hilarious because they seem vaguely possible. I mean, not really, but regardless of your politics Joe's such a great character it's hard not to laugh.

Of course, the internet made short work of ruining such a wonderful thing. For about eight hours the comedy was riding high, but then people on the internet took it and missed the whole point. Joe was now quoting random rap lyrics, or talking about Slenderman or PewdiePie, or waxing deadly serious about the election, or all other manner of "come on, man" level of mood-killers--and since the mass of the internet eats this up, these quickly replaced the good ones. The one thing that was funny for the past week was put through the grinder of populist bullshit, and now any halfway decent search of Biden memes is coming up mostly garbage.

Thanks, internet. You create glory, and create darkness. I wish we could quit you.
Posted by Crank Crank Revolution at 10:01 PM