The Saddest Dog In The World

Recently, our dog Chloe has had a problem.

We noticed it a few days ago. It wasn't immediately obvious until it was--she wasn't wagging her tail. She had it perpetually tucked beneath her, not unlike every episode of Scooby Doo.

Of course, we are responsible dog owners, so the first thing we did was freak the complete freak out. Tails were examined. Undercarriages were inspected. Treats were given to elicit responses. The dog was happy and eating and normal, except we couldn't tell because she couldn't emote. And since she uses her tail for balance, she was walking around with a lumbering gait, which would be hilarious if we weren't freaking out over it. 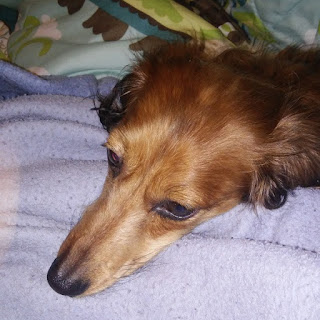 After some frantic internet searching, we determined that she probably had limber tail syndrome, or at least some variation of it. We don't know for sure, of course, but it seems to fit the symptoms. The cause is probably because she just wags her tail way too much*. The cure is to wait a few days.

It's been a few days.  Her tail is still a little limp, but we've gotten some full-on wags over the course of the week. She'll be OK.

But I will formally declare that there is no sadder sight in the world than a dog that can't wag her tail.

*Or some other reason, probably because she refuses to listen to reason and probably tweaked her waggin' muscle.
Posted by Crank Crank Revolution at 1:04 PM