Ready to play just one...more...turn? It's time for Civilization VI!

I've been a fan of the Civilization franchise for a loooong time. As in, I bought the first version as a youngish teenager are Radio Shack. Civ is one of the few games/books/media where I'm willing to pay full price for it when it comes out; there's not a whole lot out there that can claim that from me.

As always, it appears to be worth it this time, as usual. 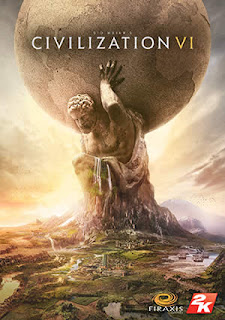 I've been blogging long enough that I reviewed the previous version of this game, Civ V. Civ V has always been a mixed bag for fans of the franchise; it did some much-needed cleanup of the format, but sacrificed a lot, made a lot of weird decisions, and it took a long time to get it right--the first six months of the game's release was not great, and gaps didn't finally get addressed until the third expansion. I did end up liking it, and logged a lot of hours on it, but ultimately by the time the game was done with development I was only playing custom maps.

Thankfully, it appears that Civ VI has avoided almost all of those mistakes.

For those who are unaware of the game, the game traces a player who starts from the dawn of civilization in 4000 BC until 2050, settling new cities, warring with neighbors, discovering new technologies, and building magnificent wonders. The games are long--they tend to take days--and are turn-based, which means you can play then go get a sandwich and come back from when you left off. This used to be standard in PC gaming fifteen years ago, but not so much anymore.

If you're not familiar with the previous games, the below may not mean much to you; civ games tend to be very similar in style, with each new version making updates and additions (like espionage and religion).

(Note: There was also a patch that fixed a lot of minor details. None of it was game-changing, but some of the early complaints have already been addressed.)

Here's what I like so far about Civ VI:
Here's what I don't like about it:
I was apprehensive about some of the things I had heard about Civ VI while it was being released--I was mostly concerned that the district system would be a lot of detail and there would be a "correct" way to plop them down. Happily, this isn't the case. Even the "bad" things above aren't really all that bad; they're pretty minor.

If you are a fan of the series, I highly recommend it. If you are the sort of person who enjoys history or enjoys a leisurely-paced game, it may be worth checking some YouTube videos to see if they are up your alley.