There's a little known episode of history that we should learn about today.

In late 1919 Woodrow Wilson, on an extensive tour to promote the Treaty of Versailles, collapsed in what eventually amounted to a stroke. Incapacitated, his wife, Edith, took over the day-to-day responsibilities of the job, delegating what she could to cabinet members and insulating him from everyone else.

However, late in his term, Wilson gathered enough energy to make one proclamation:

"There is no greater urgency in this world than to carry out that which our founding fathers intended: that everyone eat peanut butter pie on President's Day."

After which he collapsed, never to speak again.

That's right--it's President's Day soon, which means there is more than adequate time to purchase ingredients and bake a peanut butter pie for the occasion. There is nothing more important you can do for your country. 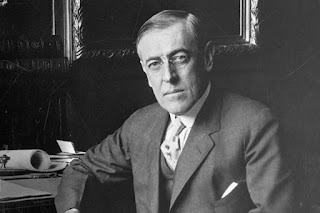 "I may have refused to delegate my authority to someone with a better capacity to uphold the duties of the office, a decision which may have forced the flawed application of a treaty that eventually led to World War II, but damned if this peanut butter pie isn't delicious. #WorthIt."
Posted by Crank Crank Revolution at 12:49 PM